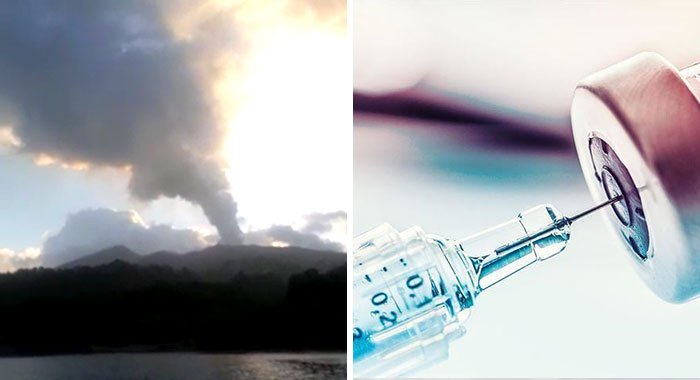 The “steaming/smoking” at La Soufriere has increased over the past few hours, the National Emergency Management Organisation (NEMO) said in a terse statement, on Thursday.

The barebones statement came amidst concerns about increased activity at the volcano, which has been erupting effusively since late December.

NEMO said that the alert level remains at orange and reminded the public that no evacuation order or notice has been issued.

“Residents especially persons living in communities close to the volcano are encouraged to be prepared in the event that it becomes necessary to evacuate at short notice,” NEMO said, adding that it will continue to monitor the situation and provide updates as it becomes necessary.

“I know I’ve taken up the whole time talking. I’ve not spoken about Soufriere except to say that everything is — I talk to Professor Robertson, this morning and our dear lady at La Soufriere has quieten down, you know, gone to the pre-existing period, you know; the swarm of tectonic earthquakes, come and then go,” Gonsalves said on NBC Radio after speaking for one hour and 42 minutes, mostly about COVID-19 and his government’s effort to convince person to take the jab.

“We keep our fingers crossed. We’re planning for the worst and hoping for the best,” the prime minister said, adding that he wants to visit the northeast and northwest of the country on the weekend.

Responding to a listener’s question, Gonsalves noted that the volcano could possibly erupt explosively

“… at the moment, things have gone back to the pre-swarm of tectonic earthquakes,” he said, referring to the increased activity that lasted for three days in March.

“But the Soufriere is still oozing. We will find out over the next couple of days whether the dome is growing or not growing or the pace at which it has slowed down or whatever. The scientists will tell us that. This will be an important matter. But everybody has to be prepared.

“I’ve said it repeatedly, every home in the red zone and also in the orange zone, both in the northeast and the northwest, pack a bag, put a couple of clothes in it, put some water, put some things to eat, even though we will provide food at the camps and so on.

“But you know when you move if there’s any hiccup and you’ve got children, you’ve got all kinds of things they need water the guy needs to eat, you know some toiletries.”

The prime minister thanked the St. Lucian government and people for offering to assist in the case of an explosive eruption.

He said he had received a call, on Tuesday, from the premier in the British Virgin Islands “about a number of things”.

“The solidarity remains there; Grenada, Antigua, the same way. But while the government is doing its part, while the state agencies doing their part, people have to do their part and the anti-vaxxers and those who are pushing a lot of false information are being grossly irresponsible. And for those who are saying they ain’t taking the vaccine as a protest against Ralph and the ULP, well, you voted in November against Ralph and Ralph is here, God willing, for the next five years.”

Speaking earlier in the programme, Gonsalves said that should the volcano erupt and people move into emergency shelters, “…  you can be assured, unless people are tested and vaccinated, you’re going to have a severe outbreak [of COVID-19] in the camps”.

Gonsalves said that science indicates this, noting that there is community spread of COVID-19 in the country, although it is at a low level.

“Let us not bury your head in the sand, let us accept the facts and the science, let us know have any cognitive dissonance on this, let us not have some confirmation of pre-existing bias that you may have in your head. Let’s keep this matter factual and scientific and take into account the requisites of social solidarity.”

He further noted that the Caribbean Public Health Agency has said that CARICOM countries should consider enhanced vigilance, policing and fines to ensure adherence to public health measures, as is successfully being implemented in the United Arab Emirates.

“And they also said well, there are some countries-specific things and one country-specific thing here is volcano. We have to take that into account,” he said.

Meanwhile, the prime minister, in an interview on VC3, also on Wednesday, responded to a question regarding why schools are opening on Monday, amidst the uncertainty surrounding the volcano.

He said that if the volcano erupts explosively, school would be closed because they will be used as shelters, and teachers as shelter managers.

“But, you can’t, on the basis of an uncertainty deny, children the right to go back to face-to-face education,” Gonsalves said.