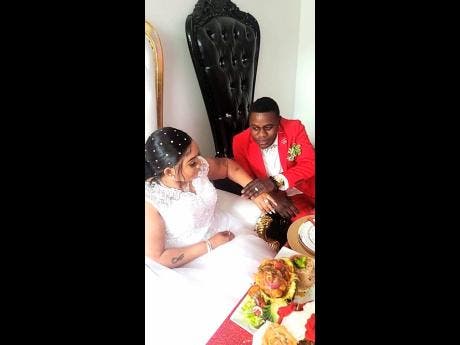 Controversial dancehall figure Nuffy is today a happily married man after tying the knot with his long-time partner, Kemeeka Samuels, on the weekend.

He describes himself as “a original gyallis” but things have changed.

“Things happen and mi did a ketch a certain type a feelings from this girl yah weh mi a fall fah and mi wah tell yuh say the first time she cook gimme, it seal the deal,” he laughed, noting that the meal was stewed peas, commonly referred to as a ‘hol’ me’ meal in Jamaican folklore.

“Dem ago say she tie me but mi nuh care cuz mi know da girl yah well clean. A di stew peas weh she cook. Supmn bout di stew peas. Di food nice bad,” he said. But Nuffy, given name Andrew Nelson, said he was also enthralled by Samuels’ honesty and said unlike many of his previous partners, he can trust her completely. They have been dating since 2013.

“It’s like I have a rebirth of love. I really and truly love this lady. Outta all a mi girl dem, mi trust her the most,” he said. Well aware that rumours have already begun swirling that the union was forged so he could acquire a green card, Nuffy assured persons that was not the case.

“We deh from she deh Jamaica. People can get up and say dem a go married but this is real, real marriage,” he said. Nuffy also encouraged his colleagues to try marriage or at least get into ‘serious’ relationships.

“I would encourage dem fi come off da market deh (gyallis market) because having more dan one woman is a pressure innu. And sometimes it’s a little bit of disrespect. I never understand the realities of having one woman and how much dat do for family. Not only di money come one place, but having kids here and there is not nice. Me well settle down and committed right now,” he said.

Samuels told THE STAR that she knows a side of Nuffy the world doesn’t get to see. “I felt like a wife even before the ring. He gives me that power and now as the wife, mi have even more power. I am a person that doesn’t like the runaround, I keep one relationship and I am with someone that really loves me and is faithful,” she said. “He is very loving, kind and even before our twins, he was a father to my oldest daughter. When we met she was about nine or 10, and he used to stay with her and she never one day say Nuffy look at her a different way. Dem supmn deh make mi know say he is the one.”