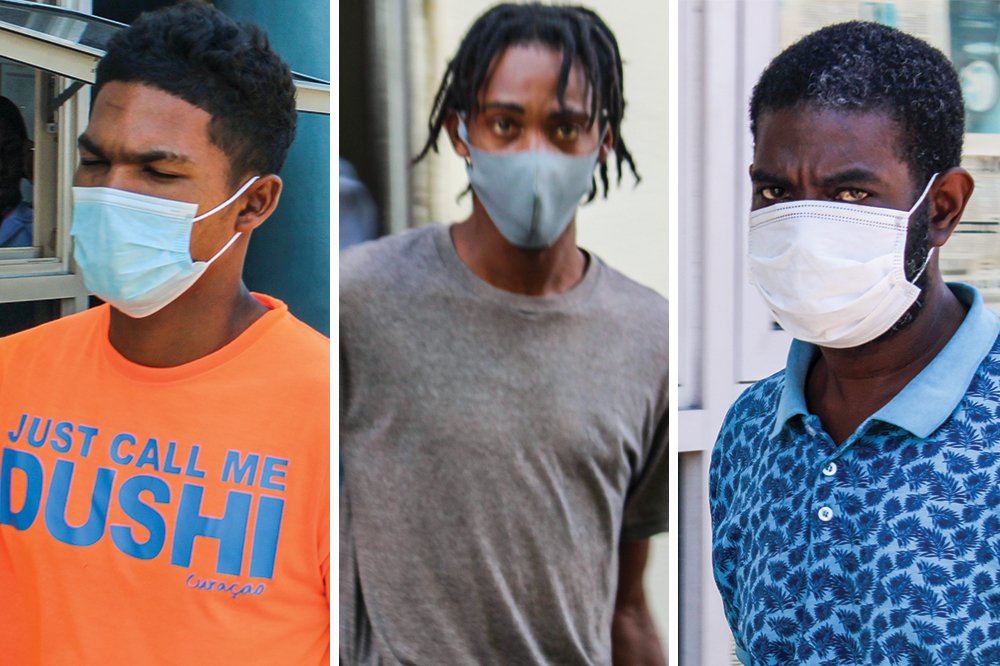 A successful operation by the coastguard has resulted in two young Grenadians and one Vincentian being taken before the court and fined for attempting to export 38 pounds of Marijuana.

The youngest of the trio is 18-year-old Grenadian, Razard Bhola, and he is followed in age by 25-year-old fisherman of Grenada, Michael Derrick, and then Gordon Paines, a 38-year-old farmer of Georgetown.

The group was caught on March 15, in the seas off Union Island, with 17,252g of the controlled drug.

After receiving information about a white and orange vessel, a coastguard vessel left the Canouan base at around 3:57pm on the said date, and headed in the direction of Union Island. Officers on board made checks on the beaches around the island, but it wasn’t until 6:20pm, when they were heading towards Frigate Rock that they saw a white and orange vessel on a course to Carriacou.

The coastguard went after them, during which PO 640 Stephens signalled the vessel to stop by using the strobe lights and siren. The boat, called ‘Fingers’, attempted to slip through their fingers by changing course, and did not stop. Paines was observed throwing sacks overboard.

Stephens lined the coastguard vessel alongside ‘Fingers’ and instructed another of his men to fire a shot across the bow of the fleeing vessel. At that point the captain of the orange and white vessel stopped it.

The officers boarded the vessel and searched the occupants. They found nothing illegal on their person, but noted that there was $586EC in Derrick’s bag.

Four crocus sacks were recovered from the water with compressed cannabis inside.

Back at the coastguard base on Canouan, the defendants were handed over to Corporal 192 Caesar of the Rapid Response Unit(RRU).

Paines assured, “Is not mine”. Derrick noted “I not taking no part, I don’t know anything about this.”

Bhola indicated, “I am the captain. I get a work to pick up ‘SM’ in Union Island and he had them things here.” He identified ‘SM’ to be Paines.

After entering guilty pleas on Tuesday, the trio were sentenced for the offences of possession of the controlled drug and attempting to export it.

Counsel Grant Connell, mitigated for Bhola and Derrick. From this, he submitted that Derrick, a friend of Bhola, got a ride with him. Bhola is said to have gotten the boat from his uncle.

The lawyer submitted that his clients had a lessor role.

After speaking on the sentencing guidelines, he asked the court to impose a fine that the men would be able to pay.

Paines indicated that he had two children, one who is three years old and a nine year old. However, on further probing by the court, he said that these were step children. He also has a previous conviction related to possession of Marijuana in a suitcase at the airport.

After pondering the matter, Chief Magistrate Rechanne Browne recalled the defendants. Using the sentencing guidelines, she placed the offences in a category while regarding the quantity and nature of the drug.

“Paines I attributed a leading role to you,” for orgnaizing and orchestrating the pick up, she said, while she attributed lessor roles to the two Grenadians.

A mitigating factor to all parties is that the offence was not a sophisticated one, in that the drug was simply present in the vessel.

“..To the benefit of defendants Derrick and Bhola is the fact that they cooperated with the police,” the magistrate also stated.

Paines’ previous record was taken into account, but no aggravating factors were found for Bhola and Derrick as offenders.

Mitigating for them as offenders, in the case of Paines, is that he has dependent children. For Derrick and Bhola, they have clean records.

“You are both relatively young, 25 and 18 years” and susceptible to being exploited, the magistrate remarked. “You have expressed a genuine remorse with regard to these offences, and it cannot go unnoticed,” Browne stated.

This was distributed to the parties based on the role they played.

The Grenadian defendants were to pay $2665 each, with a $1065 fine for the possession charge, and a $1600 fine for the attempted export. The Grenadians had to pay this sum forthwith or spend five months in prison.

Paines, who apparently had $120 on him, had to pay $1500 forthwith or spend three months in prison. The remainder of $6500 should be paid by August 31, in default of which he must spend 10 months behind bars.

A destruction order was issued for the drug, and once the fine is paid the vessel will be released.