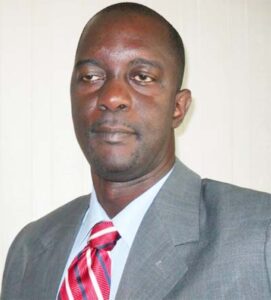 Former Head of the Guyana Lands and Surveys Commission (GL&SC), Trevor Benn, yesterday made another court appearance after he was charged for misconducting himself in public office by selling a portion of State land for four times less than its initial value.

Benn, 53, of Century Palm Gardens, Georgetown, appeared in the Georgetown Magistrates’ Courts before Principal Magistrate, Sherdel Isaacs-Marcus, with his lawyer, Mark Waldron.
He was not required to plead to the charge, which alleges that between December 1, 2018 and August 31, 2019 at GL&SC, Georgetown, while being a public officer, he willfully misconducted himself by executing the sale of two parcels of lands, all being a portion of Middle Walk, Plantation Ruimveldt, Georgetown.
The charge further stated that Benn willfully misconducted himself without any excuse or reasonable justification, when he caused Wilfred Brandsford, a businessman and former Director of the GL&SC, to pay the sum $13.5M to GL&SC for the portion of land knowing at the time that he did not have the authority to sell the said land and knowing the plot had been previously valued at the sum of $60.8M. Benn’s conduct amounts to breach of the public’s trust.
Principal Magistrate, Isaacs-Marcus, placed Benn on $100,000 bail and the matter was adjourned to May 28, 2021.
Kaieteur News had reported that Brandsford is the owner of Car Care Enterprise, and he allegedly benefitted from the sale of ‘severely undervalued’ land located at Plantation Ruimveldt, Georgetown.
In fact, when the portion of land that Brandsford bought was compared to other similar land sales by the Government, it was discovered that Benn had allegedly sold the land for 10 times less than its actual value.
Yesterday was not the first time Benn appeared in the Georgetown Magistrates’ Courts for charges surrounding the illegal sale of State lands.
On March 12, 2021, Benn appeared before Senior Magistrate, Leron Daly, for the alleged illegal sale of six acres of land and was placed on $200,000 bail for the offence.
He was not required to plead to the indictable offence, which alleges that between January 1, 2018, and March 31, 2020, at GL&SC, Georgetown, while being a public officer, he willfully misconducted himself by causing the sum of $27,000,000 to be paid by Janico Vide Industrial Engineering Limited for the lease of six acres of land at Plantation Ogle, East Coast Demerara, knowing that the GL&SC did not have the authority to lease any land at Plantation Ogle, East Coast Demerara.
It is also alleges, that on March 27, 2020, Benn granted a Provisional Lease to Janico Vide Industrial Engineering Limited and willfully misconducted himself thereby leading to a breach of the public’s trust.
Benn was arrested on March 10, 2021, after a probe was launched into the alleged illegal land sale. It is reported that despite the fact that the lands belonged to the National Industrial and Commercial Investments Limited (NICIL), Benn moved ahead to illegally lease the plot of land to a company called Janico Vide Engineering Limited for some $27M.
This publication had reported that the $27M transaction was made pursuant to a Memorandum of Understanding (MoU), the company and the GL&SC signed. That MoU dictated that the engineering company would lease the land for 50 years and pay $200,000 per acre annually.
Moreover, Benn was appointed Commissioner of GL&SC in 2016 by the David Granger administration and was granted presidential powers related to the sanctioning of renting and granting of leases, licences and permission of occupancy of all public lands.
When the Irfaan Ali administration took office in August 2020, he was stripped of those powers and was later sent packing in November. Following the revocation of his presidential powers, Attorney General, Anil Nandlall, S.C., had stated that his government would review all the leases, licences and permissions to occupy Public Lands granted by GL&SC after the No Confidence Vote of December 2, 2018.