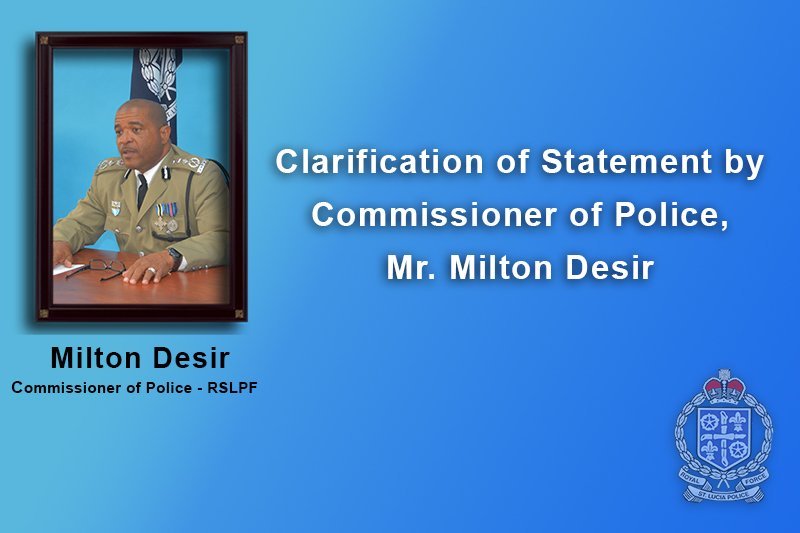 On Monday, August 8, 2022, Commissioner of Police, Milton Desir, was interviewed after a cabinet brief, by members of the media. Following this interview, he was quoted as having called for regional and international help to fight crime. The Royal Saint Lucia Police Force wishes to lend context to and clarify the statement made by Commissioner Desir.

The statement referring to seeking aid was made in relation to forensic analysis and Commissioner Desir referenced the recent arrest of a suspect in the murder of Mary Julietta Charles of La Perle, Saltibus. He stated that this homicide was resolved due to forensic analysis, which was sought outside the island. In light of this, Commissioner Desir stated that further aid is required externally to bring about resolution to some crimes committed locally. Commissioner Desir went on to explain that the team of officers from the Regional Security System who had been posted here for a period of three weeks, were not involved in investigations of matters, as they performed patrol duties. The aid sought, is in no way an indication of a lack of confidence in the investigative capabilities of our officers, but more so the limitations of resources, particularly forensic testing, which presents a challenge locally due to lack of accreditation for our facility.

In the past, we have been primarily reliant on eye witness evidence, an avenue that is increasingly becoming less viable, due to witness tampering and intimidation. The lack of a proper witness protection program significantly impedes our best efforts to solve particularly violent crimes. Such a program is impossible without proper funding, which is not readily available. As a result, we have in the past sought assistance from our partner countries, in affording witnesses with safe accommodation and we have reciprocated.

Alternative investigative routes need to be explored, including forensic analysis and auditing. Focus needs to be placed on obtaining the necessary equipment and expertise to explore areas such as DNA analysis, cybercrime investigations, ballistics testing (a critical area given that recent trends show increases in gun related crimes) and continuous training to cover modern criminal patterns. Most of these are not within the purview of the police, who do not have direct control over such expenditure. Reaching out to external entities is essential to achieving our mandate of crime reduction, as these are areas of expertise and equipment not available locally. It is therefore imperative that we seek the intervention of our regional and international counterparts.

We are not solely a global village in areas such as tourism, but also in our efforts to combat incidents of crime. We have seen how local instances of criminal acts have spilled over to neighboring islands and countries around the world, and vice versa. For instance, Saint Lucia is not a producer of firearms, but persons are illegally in possession of weapons manufactured globally. Without the necessary technological advancements and international cooperation, reducing and deterring importation is near impossible. It is therefore in everyone’s best interest to collaborate, combine resources as we tackle what is perhaps a plague which has its tentacles in every corner. No place is free of crime and it is only through leaning on each other’s strengths, resources and capabilities can there truly be worthwhile strides in this fight.