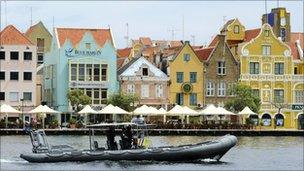 The Dutch Caribbean dependency the Netherlands Antilles has ceased to exist with a change of the five islands’ constitutional status.

Curacao and St Maarten have become autonomous countries within the Kingdom of the Netherlands, joining Aruba, which gained the status in 1986.

Bonaire, St Eustatius and Saba are now autonomous special municipalities of the kingdom.

The Netherlands retains responsibility for defence and foreign policy.

The Dutch government will also have initial oversight over Curacao’s finances under a debt-relief arrangement.

Collectively, the islands had amassed a debt of around 2bn euros (£1.75bn; $2.8bn), most of it owed to the Netherlands.

The smaller islands of St Maarten, Bonaire, St Eustatius and Saba said the debt was mostly run up by Curacao, the largest island and de facto capital of the former Netherlands Antilles.

Curacao complained that it was carrying too much of the financial burden for the federation, especially for Saba, St Eustatius and Bonaire.

Tourism, petroleum refining and offshore finance are the mainstays of the islands’ economies.

The Dutch colonised the islands, alongside Aruba, in the 17th Century. The territory, once called the Dutch West Indies, became the semi-autonomous Netherlands Antilles in 1954.

The new status, which came into effect on Sunday, followed referendums over the past few years in which Curacao, St Maarten, Bonaire and Saba opted to leave the federation while St Eustatius supported the status quo.

None of the islands voted for independence.