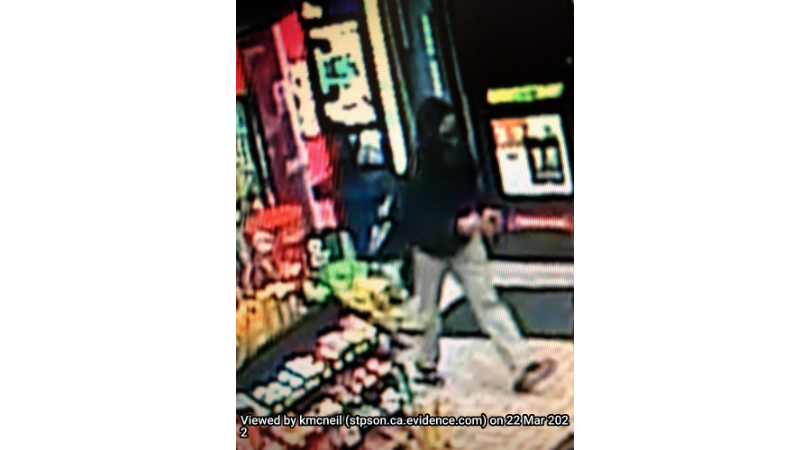 Officers on Community Patrol attended three addresses yesterday after the homeowners reported their unlocked vehicles were entered sometime overnight. Incidents occurred on Flora St., Kains St. and Elizabeth St. Vehicle ownership and insurance, binoculars and a wallet with ID and a small amount of cash were stolen. ST22004027, ST22004044 & ST22004056.

On March 21st at approximately 10:00 am Officers on Community Patrol were called to the LCBO after staff observed a female steal some liquor. The suspect selected a 750ml bottle of Hennessey cognac and left the store with no attempts to pay for it. The female is described as 5’5″ tall, wearing jeans, a dark top, a white hat with the sunglasses on top of it, black boots and was carrying a red bag. ST22004037

Yesterday afternoon Officers on Community Patrol were called to Foodland on William Street after they reported a female stole some food. The suspect selected three steaks with a value of $50 and was observed putting them in her bag. She left the store with no attempts to pay for the items. She was wearing a green hoodie and a long green coat and had a backpack. ST22004057

Last night at approximately 11:20pm Officers on Community Patrol were called to the Circle K Variety store on Talbot Street after staff reported a theft of food. A male entered the store wearing a dark hoodie, grey sweat pants and had a blue gym bag. He selected ice cream, Doritos and a pop and left without paying. Photo of suspect is below. ST22004085

At 11am yesterday Officers on Community Patrol located a male downtown that was wanted on a warrant. The 32 year old St. Thomas man was arrested without incident and transported to the Colin McGregor Building for processing. He was wanted after he breached his Probation Order. He was released by STPS with a future court date. It was learned that he was also wanted by the London Police Service, they attended our cells and took custody of him and transported him to London.

Sometime overnight of March 19th a suspect entered an unlocked garage and a shed of a home on Elizabeth Street. Nothing was taken. ST22004042

Early this morning at approximately 3am Officers on Community Patrol were called to a church on Edward St. after the alarm was set off. Entry was gained by smashing a window to the building. It appears that the suspect may have been scared off by the audible alarm as nothing was taken. A red duffle bag with personal belongings was left behind. ST22004086

At 4:40 pm yesterday Officers on Community Patrol were called to Marks on Talbot Street after they reported a theft. The suspect male selected three pairs of shoes and left without attempting to pay. Stolen was a pair of Timberland boots, Denver Hayes shoes and Adidas running shoes. The male was white, in his 30s and was wearing a reflective construction jacket. He left on a BMX bike. ST22004065