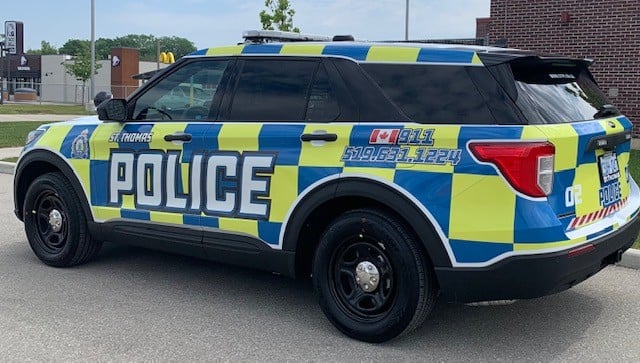 A twenty four year old St. Thomas man was arrested and charged with impaired driving following a collision on Talbot Street at Ross Wednesday night. The driver caused a three vehicle collision when he rear ended the vehicle in front that was stopped at the intersection. That vehicle was then pushed into another. When Officers on Community Patrol attended they suspected the driver was impaired by alcohol. He was placed under arrest and transported to the Colin McGregor Building for testing. Breath samples collected indicated the man had more than twice the legal limit of alcohol in his system. He was charged with Impaired Operation – Blood Alcohol Concentration 80 Plus and later released on an Appearance Notice for court. ^4542

A forty seven year old St. Thomas man was arrested and charged following a disturbance. The man is alleged to have assaulted his estranged common law girlfriend during an argument. He was taken into custody without incident after he turned himself in at the Colin McGregor Building Thursday afternoon. He was charged with Assault and Assault with a Weapon x3 and later released on an Undertaking with court date. ^4568

A twenty five year old London man wanted on a probation warrant in St. Thomas was arrested Thursday by London Police. Officers were dealing with the man on an unrelated matter when they discovered he was wanted. He was taken into custody without incident and transported to the Colin McGregor Building for processing. The warrant was issued after the man was alleged to have breached his court ordered release conditions. He was later released on an Appearance Notice for court. ^4573

Police are investigating after a shed located behind a home on Alexandria Avenue was broken into sometime over the last two weeks. Several tools were reported stolen with a total value around $500. If you have any information about this incident or saw anything suspicious in the area please contact STPS at 519-631-1224 or submit a tip online at www.stthomascrimestoppers.ca Refer to case #ST22004576

A vehicle parked on Pearl Street was entered sometime Wednesday night. A pink wallet containing cash, identification and debit/credit cards was reported stolen. Please remember to lock your vehicles and take valuables inside. ^4577

Forty three year old John Milmine of St. Thomas was arrested Thursday afternoon on Gladstone Avenue. Officers on Community Patrol recognized him as being wanted on a warrant for theft under $5000. The warrant was issued after he was identified as the suspect observed shoplifting from a store in the downtown. He was taken into custody without incident for processing and later released on an Undertaking with court date. ^4579

A twenty nine year old St. Thomas man was arrested and charged with Operation While Impaired by Drug Thursday night around 6 pm. Officers on community patrol responded to a report of a man slumped over the steering wheel of the vehicle he was driving on Wellington Street. Once on scene officers suspected he was impaired by drug. The man failed a standard field sobriety test and was taken into custody without incident. He was transported to the Colin McGregor Building to be assessed by a Drug Recognitions Expert Officer. During processing officers discovered he was also wanted on a warrant by the Elgin County OPP. He was later released on an Appearance Notice with court date and turned over to the custody of the OPP. ^4592