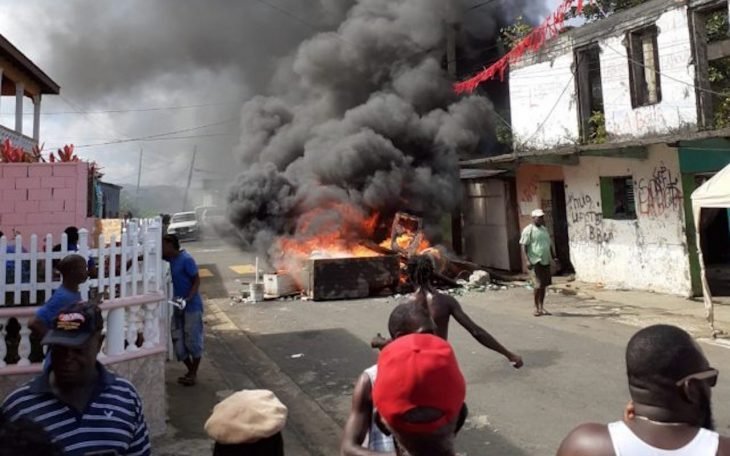 Barbadian troops and police officers under the command of the Regional Security System (RSS) were tonight preparing to be deployed to Dominica to help maintain law and order, as unrest builds in the run-up to Friday’s general election.

For a second day, supporters of the Opposition United Workers Party (UWP) blocked the main road to the Douglas-Charles Airport and set fire to obstacles in the north-eastern constituency of Marigot that is held by Opposition Leader Lennox Linton.

The protesters said they are calling for electoral reform, including cleansing of the voters’ list and the issuing of ID cards to voters.

They contend that the poll will not be free and fair without these reforms.

But Prime Minister Roosevelt Skerrit, who is seeking an unprecedented fifth straight term, though dogged by allegations of corruption including the sale of diplomatic posts to wealthy foreigners, has accused the opposition UWP of blocking government’s efforts at electoral reform. He has maintained that this year’s election is being held under the same election laws that have governed the country since it became an independent nation in 1978.

Before the December 6 election date was announced, the UWP vowed there would be no election without electoral reform. But the party, led by Linton, is contesting all 21 constituencies, even as he maintains that the UWP will continue to campaign for electoral reform.

Regional pollster Peter Wickham questioned the purpose of the protests, given Linton’s decision to contest the election.

He told Barbados TODAY: “In a context where the opposition is uncomfortable I think that the precedent that should be followed, that which was held in Trinidad and Tobago in the 70s, in Jamaica in the 1980s; if you’re not comfortable with an election, do not contest it.

“The opposition UWP has done this poll saying they are ahead.

“Now my sense is that if you are comfortable with the process and you say you are ahead in the polls, then what’s the need for all this?

“You cannot have the issues of electoral reform addressed in the time that is available for the next election.

“And the people determine, through voting at the polls, who will govern their country for the next five years.

“And this is what needs to happen in Dominica.

In an address to the nation on Monday night, Skerrit accused Linton of encouraging the violence, declaring it was part of an organised strategy by the opposition to disrupt the election.

The disturbance started after a bench warrant was issued but not served on Linton and former prime minister Edison James, after they failed to appear before a magistrate on Monday morning.

They are facing charges dating back to an incident in 2017 when they were allegedly involved in incitement by encouraging, persuading or instigating by words, causing others to jeopardize public safety or endanger the peace following a UWP public meeting.

Skerrit charged that it was another attempt by the opposition and its supporters to give a negative impression of Dominica.

The Dominican leader declared: “I am calling on Lennox Linton, Edison James and the UWP to bring an end to this lawlessness.

But Linton defended his party at a news conference today, saying the UWP is a party of peace.

“We indicated there quite clearly that we are a party of peace, we advocate peace, we preach peace [and] it is part of our modus operandi,” he told reporters.

Linton is the UWP candidate for the Marigot constituency. He defended the protesters, saying they were standing up for issues of justice that need to be addressed.

“The justice issues for the people of Marigot are clear and need to be addressed before we start talking anything about peace,” he stated.

The UWP has also written to Police Commissioner Daniel Carbon requesting police protection for the opposition leader after the party said “credible threats” were made against him and his family, although it gave no further details.

Also on Tuesday, the High Court declined to hear an application by several individuals to postpone the election, saying it had no jurisdiction over issuing an injunction once a writ for the poll had been issued by the republic’s President.

Last week, the petitioners asked the court to issue an interim injunction restraining the parties concerned from holding the elections on December 6, or any other date prior to February 5 2020, unless the procedures are in place to hold the election.

But in a ruling, Justice Bernie Stephenson said she agreed with the arguments from the respondents that since the election writ has been issued, the election process has started, and the only remedy was through an election petition once the elections had taken place.

Attorney Cara Shillingford, who represents the petitioners, says she plans to appeal the decision.

The petitioners named President Charles Savarin and the Electoral Commission, the Chief Elections Officer, the Cabinet of Dominica, the Attorney General and the state-owned DBS radio as the respondents.

President Savarin’s lawyer, Lennox Lawrence, acknowledged the petitioners’ right to appeal and said the matter could end up before the Caribbean Court of Justice, Dominica’s final appellate court.