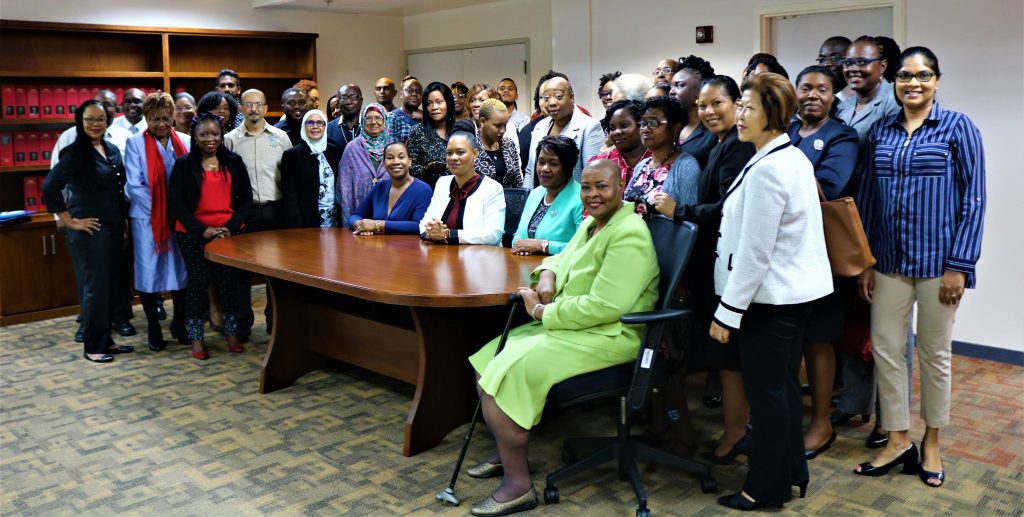 The workshops result from recommendations emanating from a Youth, Masculinity and Violence Report which was commissioned by the CARICOM Secretariat in 2012, in which 1,000 students, ages 15-21 years, along with their parents and teachers, were surveyed in five CARICOM Member countries namely, Belize, Guyana, Jamaica, Suriname, and Trinidad and Tobago.

The study identified several areas of concern, among them: dominant forms of masculinity appear to be operating not ‘along with’ but at the expense of other forms such as:

1-Boys are being forced to conform with societal expectations or risk being labelled and ridiculed from peers as well as critical adult groups;

2-Aggression and physical violence continue to be viewed as ‘normal’ male behavior while similar behavior from females is viewed negatively;

3-Harmful beliefs exist among young males regarding the treatment of women and girls and manifest themselves in a variety of circumstances which are often linked to Gender-based violence (GBV).

The Honourable Ayanna Webster-Roy, Minister of State in the Office of the Prime Minister, Trinidad and Tobago in her Opening Remarks stated that, “I am pleased to stand with you today as we widen the conversation and retool the strategies around “Rethinking Masculinity, Understanding Gender Equality as a Means of Ending Gender-Based Violence in Caribbean Schools. The high social value and pressures associated with men having to prove their eligibility in society are directly linked to the academic disparity evidenced by our girls outperforming our boys in school and the acceptance of Gender-Based Violence (GBV).

“Hegemonic masculinities promote in a man’s psyche that violence, promiscuity and the suppression of his emotions are normal. Such toxic forms of masculinity continue to erode the socio-cultural fabric of our families, schools and nation,” Ms Webster-Roy said.

“Data from the Crime and Problem Analysis (CAPA) Branch of the Trinidad and Tobago Police Service (TTPS) revealed for January to May 2019, a total of 171 Domestic Violence Incidents Reports were received by the Police of which 128 reports involved female victims (approx. 75%) as compared to 43 reports which involved male victims (approx. 25%),” she noted..

“Ladies and gentlemen, the re-education of our citizenry, especially our youth, is critical to reinforce positive imaging, re-structure mind-sets and behaviours on masculinity, gender equality and the dangers of continued gender-based violence.”

She implored the public and private sector, civil society organizations in communities to         “work harmoniously to engender impactful change in this area as many of you stand in a position of influence on these young minds in the school, at church, in the community.”

She said the Office of the Prime Minister continues to create avenues and spaces for boys and men to express their true identity through gender programmes such as the ‘Barbershop Initiative’ as well as the upcoming ‘SPEAK’ video series which aim to create safe spaces for men to dialogue in understanding their identity and the gender roles.

“The question of masculinity has been addressed in a series of publications; and the importance of a gender perspective, as underlined strongly in The Regional Synthesis Report of the CARICOM Single Market and Economy (CSME), along with the Caribbean Joint Statement on Gender Equality and the Post 2015 and SIDS Agenda, along with the Beijing Declaration and Platform for Action, which marks 25 years, next year, as the most comprehensive road map, ever produced, to achieve Gender Equality and Women’s Empowerment.

“It is against this backdrop that the Gender and Development Programme of the CARICOM Secretariat decided to take a proactive approach to improve Regional policy directives in education planning and instruction and improve society’s outlook via Regional workshops targeting education professionals along with civil society practitioners and faith-based leaders.” she said.

“Close your eyes for a moment,” she urged participants, “and imagine a Trinidad where boys respect girls, women respect men, teachers respect students, children respect their parents and vice versa…ideal Ha! Well, I’m here to tell you that while it may seem ideal, it’s not a pipe dream but rather the way things ought to be.”

Ms.  Williams expressed gratitude to the European Union for the funding received via the 10th EDF Crime and Security CARIFORUM Project, and stated, “I wish you well in your two days of deliberation, knowledge sharing and networking with a promise that we will be in touch with the teachers from the schools that were surveyed, to see how they’re building that culture of peace which will certainly ripple in your community.”

Professor Bailey led the first day’s presentation which concluded with these Summary Points:

“In most cultures, hegemonic masculinity is regarded as the accepted norm of what it means to be a man, marked by dominance over women as well as heterosexuality, and can be very culture specific.

Professor Bailey also shared that toxic masculinities are those most closely aligned with aggression, crime and violence and is closely tied to shifts in the political-economy of societies which threaten traditional male occupations and impact men’s role as the “male bread-winner. It is also evident in all spheres of life – home, school and society, and threaten the safety and well-being of girls, women and other men. Females can also assume behaviours akin to a toxic masculinity and become the perpetrator with a male as victim.

Day 2 of the Workshop will be facilitated by Mr. Weller, Clinical Psychologist,  and will address topics such as why there is an emphasis on engaging men and boys in setting the stage for the process, barriers to engagement, the roles of men, relevant theories of change, creating networks for sustainability, and mechanisms for communication, among others.