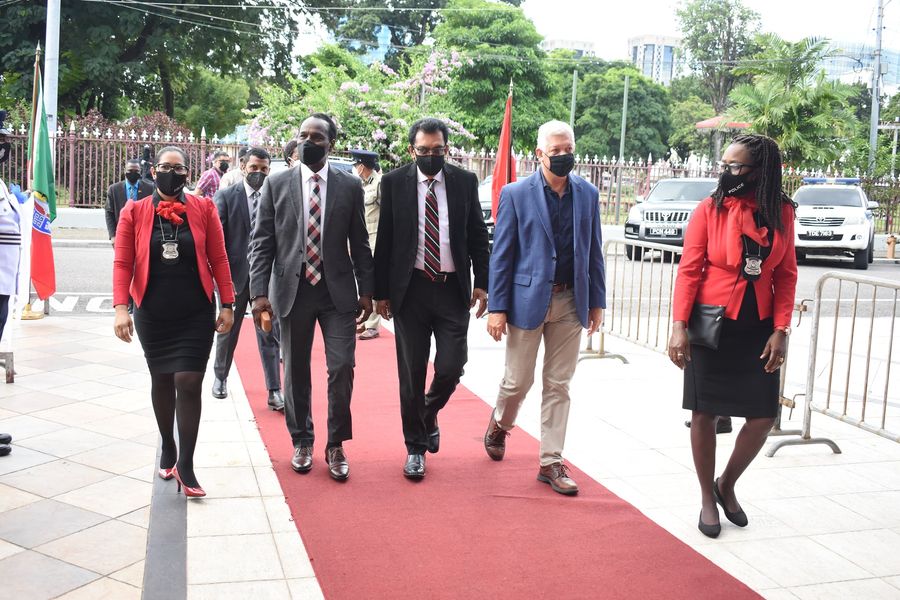 The Christmas anti-crime plan for the Capital city was launched today at the Council Chambers, City Hall, Port-of-Spain.
The launch, commencing with a presentation of the plan culminated with a walk through the city, was led by the Port-of-Spain City Police (PoSCP), and assisted by the Trinidad and Tobago Police Service (TTPS).
The event was attended by Minister of National Security, the Honourable, Fitzgerald Hinds, Minister of Rural Development and Local Government, Senator the Honourable Kazim Hosein, Mayor of Port-of-Spain, His Worship the Alderman, Joel Martinez, Deputy Commissioner of Police, Mc Donald Jacob and Superintendent of the PoSCP Glen Charles.
The unilateral focus was “There Is No Place Like a Safe City”.
In his feature address, Minister Hinds underscored the importance of cohesion among the stakeholders involved. He said the TTPS and TTMPS “cannot sleep” and must be accountable to the citizens and to themselves in upholding the laws of the land. He said that he is proud of the progress of the TTMPS between 2016 and 2021.
Minister Hinds added that the plan showed “growth, strength, power and purpose” and will create a feeling of security and safety for the approximately 400,000 persons passing through the city on a daily basis, most especially during this period.
Mayor Martinez said “a capital city is your calling card to the world,” saying how imperative it was for the right message to be sent. The anti-crime plan is aimed at allowing the transient population to enjoy the city as it ought to be.
DCP Jacob observed that 2016 was a defining moment for the Municipal Officers and was happy to see that plans laid in 2016 still have an impact today and have grown and developed through the years to ensure a safer and more enjoyable Port-of-Spain. He highlighted the ongoing collaborative effort between the TTPS and TTMPS including the support of the Operations Command Centre, the Guard and Emergency Branch, the Inter-Agency Task Force and the Port-of-Spain Task Force in making the city much safer at this crucial juncture.
DCP Jacob revealed that the TTPS is reorganising and re-strategising in preparation for the end of the State of Emergency.
The party canvased through the town and down to the Brian Lara Promenade where the PoSCP had a public awareness caravan aimed at giving citizens further tools and suggestions to ensure their safety.