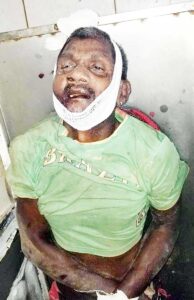 The Guyana Police Force (GPF) is seeking the public’s assistance in identifying a gold miner who died Thursday last in a mining pit accident at Kuribong Backdam, Region Eight.
According to the police, the deceased is of East Indian decent and was identified to them only as “Coolie”.
Based on information received, the dead man was working on a mining operation owned by 50-year-old Fitz English of Lot 528 Haslington Housing Scheme, East Coast Demerara. The unidentified man was employed as a pitman and was reportedly working at the mining site for about five days.
Police reports reveal that around 18:00hrs, the man was working in the mining pit along with two other crew members when the walls of the pit collapsed and a tree fell on top of him. Immediately, an alarm was raised and the miner was picked up by his fellow crew members and was rushed to the Mahdia Regional Hospital where he was examined by a doctor who pronounced him dead on arrival.
Kaieteur News was told that his two crewmates managed to escape unhurt.
Police revealed that the body was examined and injuries were seen on his right foot and to his head. The dead man’s body was then transported to the mortuary where it is awaiting identification and a post mortem examination. An investigation into the incident has since been launched.