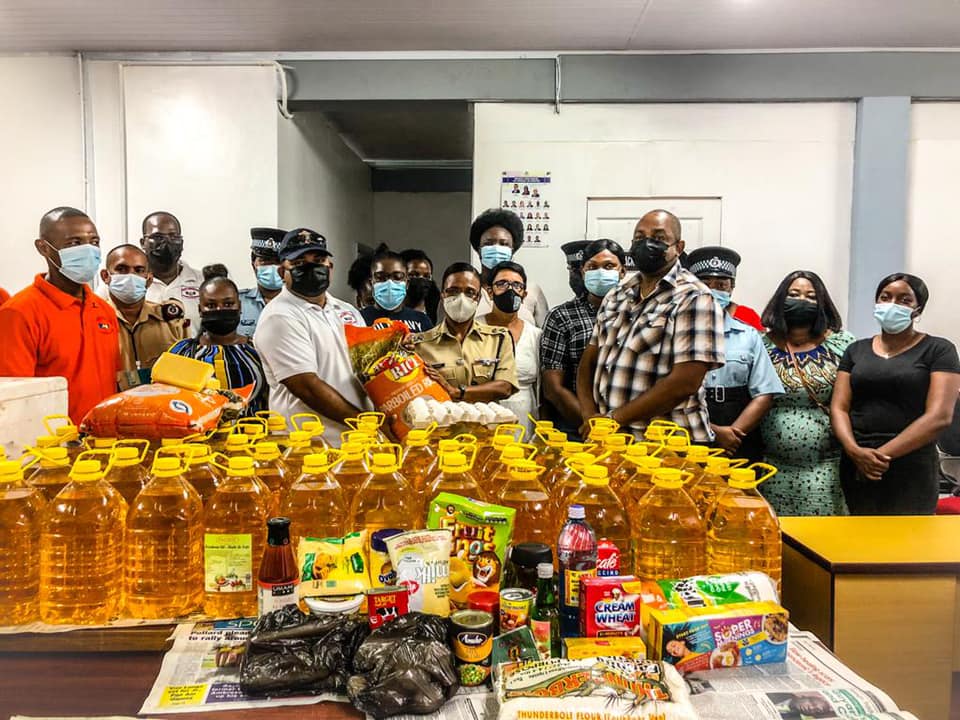 An atmosphere solemnly reminiscent of Perry Cuomo’s, ”It’s beginning to look a lot like Christmas”, was created earlier today as ranks gathered to offload bulks of food items for distribution to their fellow colleagues at the Brickdam Police Station Annex.

The hamper distribution organised and spearheaded by the Police Association, provided several food items for the ranks; with a preferring focus on female police ranks, single mothers, and others. Chairman of the Police Association, Inspector Prem Narine said that the Association has, over the last few months, been monitoring and assisting many hamper-distributions for sections of civil society and that ”it is time to give back to our own”.

He said the decision was made to tend to Brickdam specifically, following the tragic fire which resulted in the destruction and relocation of the Divisional Headquarters.Commander of Regional Division 4 ‘A’, Assistant Commissioner Simon Mc’Bean who officiated the hamper distribution, thanked the Association – and by extension, the Force’s Administration – for a timely and rewarding donation to his ranks. He said for many, it will be an early Christmas gift, while noting that considerations of this nature will keep the ranks smiling as the Division works its way into the season of Christmas Policing.

The drive, which is a collaborative effort of the Association and the Force’s Administration, catered for a total of five hundred and ten ranks from the Divisions and includes oil; rice, milk, sugar, flour, eggs and cheese, among other essentials for the kitchen.

Chairman Narine said that through its own efforts, the Association has been providing for its members, but this kind of outreach could not have been made possible without the assistance of the Force’s Administration. He also added that the body aims to provide similar assistance to ranks throughout all the twelve Police Divisions before Christmas.

“Our plan is to aid welfare and to make the welfare of ranks our priority,” He stated while nothing that initially there were proposed visits to the various Divisions to hear the concerns of ranks but he foresaw it better to go with provisions to assist, especially in a Covid-affected time, as opposed to just going to announce ”what we want to and just hear their concerns”.

Just recently, a Police rank reported to the Public Relations Officer Mr. Stan Gouveia, that through the Association’s intervention, and collaboration with the Ministry of Housing and Water, that he was able to acquire his own house lot; a dream which before time, seemed to have dimmed, weary of waiting without any feedback.

Mr. Narine noted that that kind of approach characterises a continuous effort with the Ministry; adding that one of the first issues deliberated on at his initial meeting focused largely on the acquisition of house lots for ranks who before time, complained of little or no progress in that regard; before his appointment as Chairman.

Following the Association’s election, there were clouds of doubt, in relation to a democratically-elected Chairman and further, the legitimacy of his leadership. That kind of distraction was eventually removed following a statement from the Caribbean Federation of Police Welfare Association. When asked about the relationship between the regional body and the GPF’s Association, Mr. Narine said that the kind of negativity then attached to the local Association which is a founding member of the regional body is none-existent. He said the current relationship with the Federation is one which is forward-building and further noted that as Chairman he prefers to answer to accusations with action, adding that just recently, the Association was engaged by the Federation to part-take in an initiative which will focus on providing medical assistance for ranks of the Guyana Police Force.

The Police Association is open to collaboration with other agencies in efforts to better serve its ranks. Mr. Narine – recollecting a recent visit to the Brickdam H.Q Annex – noted the Association’s willingness to collaborate was seen expressly in that instance where medical personnel and other private-sector operatives indicated their readiness to render services should the need arise.

The Inspector said he considered that following the relocating of the Headquarters–with ranks working in temporarily fixed tents as offices, it would have been a little challenging. He said he was pleased to see however, that the tents have been equipped with air-conditioning units–added testimony of the Force Administration’s concern for its ranks.

Notwithstanding these efforts, Inspector Narine concluded that collaboration remains a means of making the work of the Police easier; and with that in mind, the Police Association remains opened to collaborating wherever necessary, as it continues to serve in the best interest of ranks.