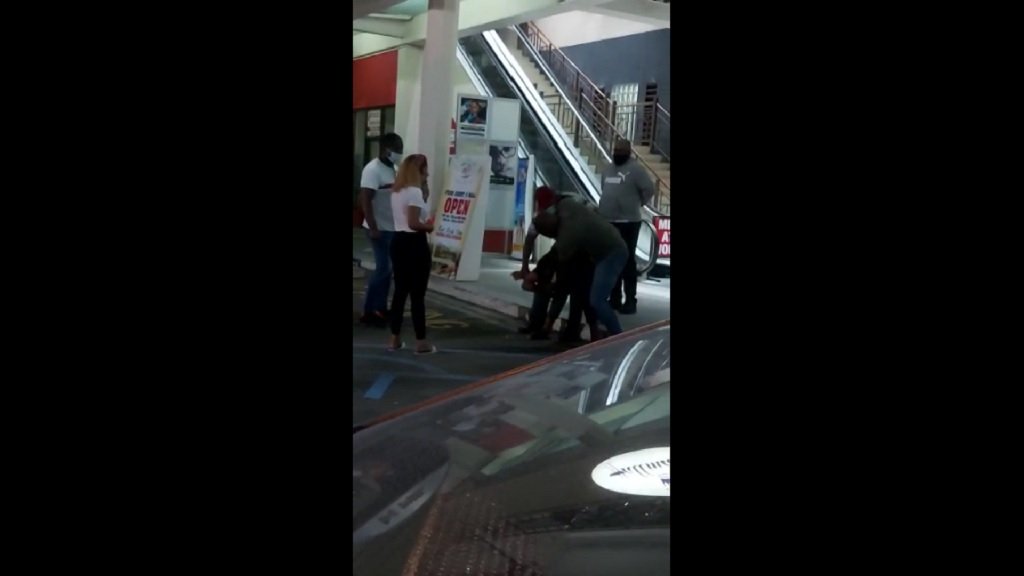 The Royal St Lucia Police Force has released a statement concerning an incident caught on video in which an officer was injured while attempting to handcuff a man.

The police say the officer sustained a significant bite injury and that “physical force became necessary” in the officer’s defense.

The statement can be read in full below:

“About 7:50 p.m. on Wednesday, April 15, 2021, an off-duty police officer encountered a couple outside a supermarket in Rodney Bay, Gros Islet. The couple was attempting to gain access into the establishment; the female was not, however, wearing a mask. Despite several times being cautioned to do so, she refused to comply, added to which, the male companion proceeded to hurl threats and insults at the officer. A verbal exchange ensued, during which time the officer refused to allow them access into the establishment without masks. The mask-wearing mandate, of course, has been in effect for businesses for several months now. The officer indicated that during this time, he was assaulted by the male and therefore informed him that he was placing him under arrest.

A second off-duty police officer, who was in the vicinity, approached the first officer and attempted to provide aid by withdrawing the aggressive male from the area. A degree of calm was achieved until a crowd built up, jeering at the officers and encouraging the male to flee the area. He did attempt to do so at which point, officers sought to restrain him, by way of handcuffs. The officers were able to place the handcuffs on one hand, however, the male proceeded to physically resist. In the process of resisting, he caused a significant bite injury to the arm of the officer who was attempting to assist him previously. Physical force became necessary and was utilised by officers in their defense (particularly to cease the biting of the officer) and to effect a lawful arrest.

The male is currently in police custody pending charges. The injured officer was medically treated but requires further medical treatment in order to restore full functionality to the arm. The male in custody has been assessed and has no physical injuries. We reiterate that the officers involved did not utilise physical force, until they were themselves subjected to personal injury and under the possibility of further harm.

The Royal Saint Lucia Police remains committed to upholding the laws and continues to urge persons to adhere to the laws and protocols implemented for their well-being. As a disciplined organisation, the Force will in no way tolerate flagrant disregard for the efforts of our hard-working men and women, who daily dedicate their lives towards creating a safer environment for all of the people in Saint Lucia.”