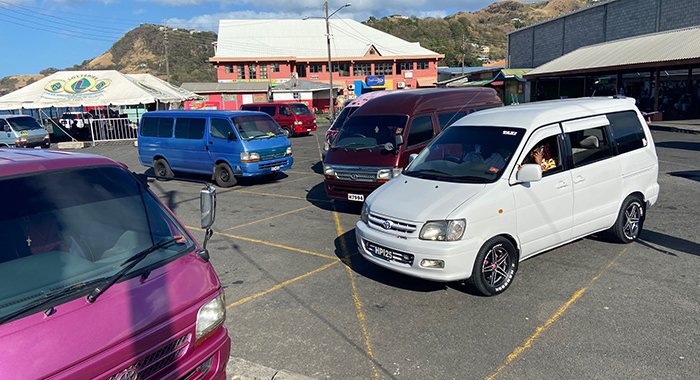 A number of omnibuses were parked at the Leeward Bus Terminal on Monday morning. (iWN photo)

Omnibus operators in St. Vincent and the Grenadines are today, Monday, withdrawing their services for the second time in two weeks over the government’s COOVID-19 protocols.

“We don’t have a definite period of time. Our intent is to withdraw it for as long at it takes to get the 12 capacity,” Royron Adams, president of the Vincentian Transportation Association (VINTAS), the umbrella body for omnibuses, told iWitness News on Monday

Some omnibuses withdrew their services two weeks ago after the government halved the number of passengers they are licensed to carry, but did not announce any concomitant subsidy.

After the withdrawal of service, the government announced that buses will get, for two months, EC$500 or EC$600 monthly, depending on the number of passengers they are licensed to carry.

A subsidy of the same amount was granted last year, when 18-seater buses were only allowed to carry 12 passengers.

Adams, however, said that the subsidy was the only item on VINTAS’ “list of options” to which the government agreed when they met two weeks ago.

The option also included waiving travel tickets for picking up and setting down passengers other than at a bus stop, and the waiver of licences and insurance fees.

The VINTAS head said that the government also promised to review the number of passengers permitted to travel on an omnibus, in light of the pandemic.

“And we didn’t hear anything back from them on the capacity,” he said, adding that VINTAS has written, on several occasions, to the government which has never responded in writing.

“Even as the prime minister announced the intention to support us with a subsidy and his promise to have the Cabinet write to us with respect to his commitment, we still haven’t received that in writing,” Adams told iWitness News.

He said that if VINTAS had received something in writing saying that the subsidy support came on condition that omnibuses must work four out of the five weekdays — as Prime Minister Ralph Gonsalves reportedly later said, VINTAS would not have agreed.

The omnibus business is unpredictable in that one does not know when an omnibus may encounter a mechanical or other problem and have to be off the road for a number of days, Adams explained.

“But, again, that was not sent to us in writing and those conditions were never discussed in the meeting.

“Like I said, we know several operators will not be able to qualify for the subsidy for several reasons. You may have an issue that arises in the week that causes you to be off the road for two days. There goes your qualification.

“Some guys may have their bus in the garage doing major repairs — gearbox, engine fix, seat repairs, other things. That would disqualify them. I am hearing that they (the government) will give consideration to them.

“But how do you give objective consideration to them? How do you know when a man is being genuine about those things? There is no real mechanism. So that condition is obviously a real issue for us.”

Adams said that some operators have tried to abide by the rule that mandates that they halve their ridership.

He, however, told iWitness News:

“It is no secret. Every single bus on the road who tries to operate under the circumstance is breaking the protocol because it is the only way they can make any kind of money. And now that the police have stepped up their surveillance for omnibuses, it is clear that all operators are saying’, ‘We just can’t do it anymore. We don’t have a chance by breaking the law because police are out on the road, therefore, we just need to get our capacity back to a minimum of 12.’”

Adams further said that physical distancing is impossible in a bus and there is, therefore, no reason, why the government cannot allow 12 passengers in an 18-seat omnibus, as they did last year amidst the coronavirus pandemic.