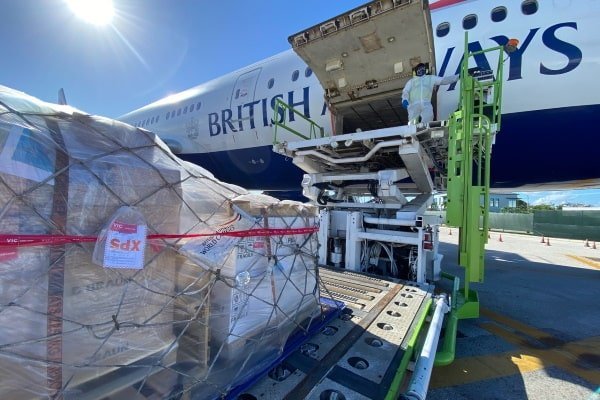 (CNS): Cayman’s governor, premier, health minister and top doctor will be the first people to get the COVID-19 vaccine ,not because they are vulnerable to the coronavirus but because of fears that ‘anti-vaxxer’ sentiment may have gripped the country. Governor Martyn Roper said Tuesday that the take-up level of the vaccine will determine when Cayman gets its next batch, and Premier Alden McLaughlin said he believes it is the only solution to a safe re-opening of borders.

Both men fear that Cayman may be slow to take up the free inoculation against the COVID-19 pandemic and they hope that by getting the injection first at a public event, to be streamed live on TV and the internet on Thursday, the majority of residents might be more will be willing to take it too.

Speaking at Owen Roberts Airport as the vaccines arrived on Tuesday, McLaughlin said he believed the vaccine was safe.

“I am confident that the vaccine is absolutely safe,” McLaughlin said, noting that this was why he had agreed to be among the first to take it. “Almost two million people have died as a result of COVID, so if we don’t immunize ourselves, eventually Cayman is going to lose this bubble… A vaccine is the way out.”

He said he hoped that by the end of March enough residents here will have had the vaccine, which will allow the country to return to something close to normalcy so residents can travel and visitors can return.

Health Minister Dwayne Seymour said there was a lot of “negativity going around, a lot of messages going around with reasons not to take the vaccine”, but he said people should take it. Seymour said that he was skeptical at first but now he believed it was safe.

The vaccine is being distributed for free, and despite fears of a slow uptake, it will being administered on a voluntary basis for everyone. Government has also confirmed that even healthcare workers will not be forced to take the shot

Chief Medical Officer Dr John Lee, who will also be vaccinated in the live-streamed event Thursday, said that people should not worry because, despite what appears to be a rapid process, the research was solid.

“I understand the concerns of many in the community regarding the swift pace of the development of the COVID-19 vaccine but I want to reassure everyone this process has been as stringent as possible,” he said. “The challenge of the pandemic has sped up the development process, as did prompt worldwide funding. The duration of the trials has not been shortened in anyway, and normal safety measures have remained in place.”

Dr Lee has produced a video on the myths around the COVID-19 vaccine, in which he points out that the money invested by world governments in the work to find this vaccine has helped make the process far quicker than normal. Many of those working on the vaccine also drew on existing work.

Since Dr Lee produced the video, the vaccine has been administered to millions of people around the world. By 5 January, according to various reports, around 5.6 million doses in 37 countries have been given out. So far there have been only a tiny number of documented serious ill-effects as a result of the shots, largely due to allergic reactions.

The Pfizer-BioNTech COVID-19 vaccine is believed to be around 95% effective, but around 70% of the adult population will still need to be vaccinated in order to reach the point of ‘herd immunity’. This is where the virus stops spreading because of the difficulty it has in finding victims to infect who can pass it on to a new host.

Therefore, having buy-in from the community as quickly as possible is the only solution to controlling the pandemic.

However, despite the significant evidence and historical success of vaccine programmes, from small pox to polio, an utterly discredited claim the late 1990s by Andrew Wakefield that the MMR vaccine was responsible for autism added significant fuel to the anti-vaxxer movement.