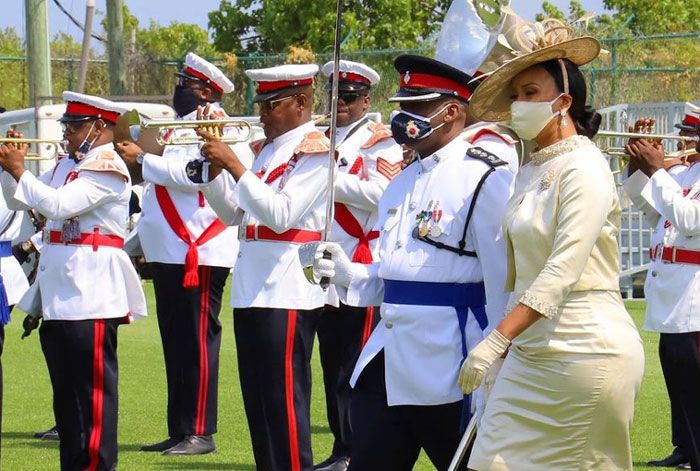 Scores of guests dressed in their finery gathered at Grand Turk Parade Ground on Friday, March 5, for the ecumenical service and swearing in ceremony of the House of Assembly.
The four-hour long morning event was broadcast live on the Office of the Premier’s Facebook page and was watched by thousands of people throughout the TCI and the world.
Invited guests, public officials, clergy and spouses were first to arrive and be seated, soon followed by the arrival of House of Assembly members and Cabinet ministers and spouses.
Then arrived Attorney General Hon. Rhondalee Braithwaite-Knowles and her husband, Chief Justice Hon. Mabel Agyemang, and Opposition leader Hon. Edwin Astwood.

Hon. Akierra Missick, Minister of Infrastructure, Housing, Planning and Development, Deputy Premier Hon. Erwin Jay Saunders and his wife were also seated.
And, Premier Hon. Charles Washington Misick and his wife, and Acting Governor Anya Williams and Darren Williams also arrived at the ceremony.
Presiding over the ecumenical service was Canon Mark Kendall who at about 9am introduced the first hymn ‘O God, our help in ages past’ accompanied by organist Leathe Wilson.

Akierra Missick briefly welcomed attendees before Pastor Steve Cornwall read the opening prayer and the Reverend Claire Robinson gave a reading of the Old Tesament.
Canon Kendall then read a responsorial psalm and Bishop Coleta Williams III delivered an excerpt from the New Testament before another hymn, ‘God help our country to be strong’.
The canon then told the new members of the House of Assembly: “The people of the TCI take it for granted that all 21 of you bring something to the House and to governance.

“Collectively a shared vision, and a collection of backgrounds, peculiar knowledge of specific areas in the TCI, experience, skillsets, education, professional careers commitment and energy.”
He spoke of individual members of the House and the faith he has in each of them to work for the people of the TCI.
Next was another hymn, ‘I vow to thee my country, all earthly things above’, before series of intercessions by Bishop Bryant Cox, Bishop Austraham Hamilton and pastor Mary Forbes.

Gathered attendees recited the Lord’s Prayer and Canon Kendall finished the ecumenical service with a benediction and a final singing of the ‘National Song’.
Swearing in ceremonyThe first sitting of the first meeting of the first session of the 12th legislature of the House of Assembly of the TCI was held at 10am under a tent at the Grand Turk Parade Grounds.
Canon Mark Kendall read a prayer before Tracey Parker, clerk to the House of Assembly, read the proclamation summoning the procession of the session.

Gordon Burton was the elected as Speaker of the House of Assembly and administered his oath of allegiance.
This was followed by Deputy Speaker John Malcolm and then members of the House of Assembly.
The House was the suspended to allow the Acting Governor Anya Williams to make her address.
Attendees moved outside to watch the inspection of the Guard of Honour before returning inside where a fanfare of trumpets was sounded.

Julian Garland sang the National Anthem and National Song and Robyn Forbes sang ‘Bless This House’.
Acting Governor Anya Williams went on to read the throne speech detailing the Government’s plans for its four-year tenure, before leaving the House of Assembly.

The full business of the House continued with Premier Misick and Opposition leader Edwin Astwood responding to the throne speech, and the first reading of two money bills.