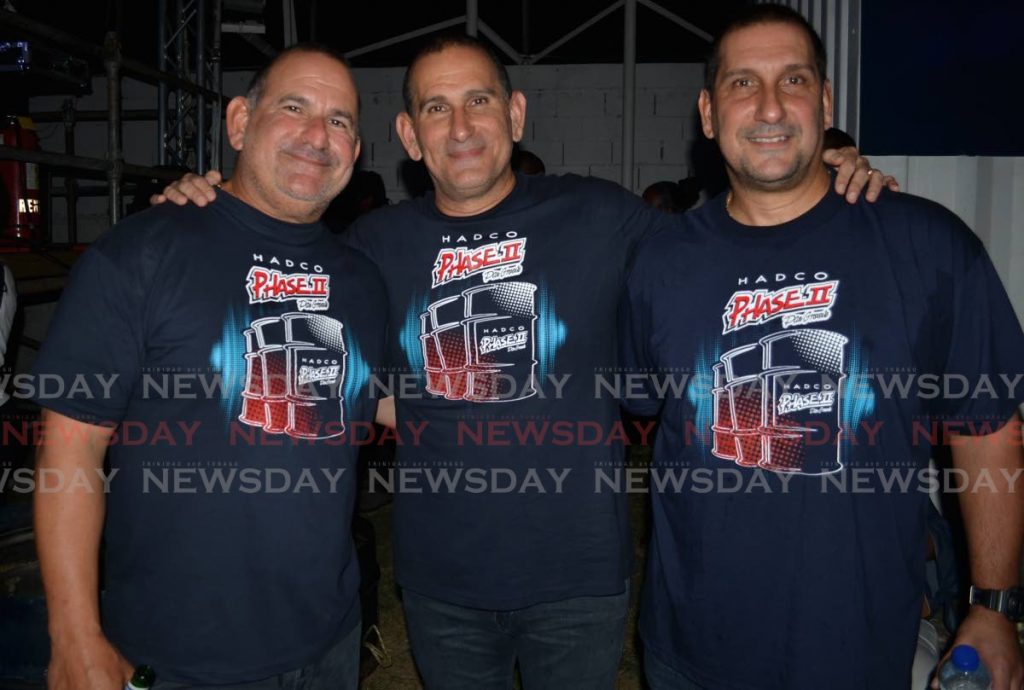 The thing about business, John Hadad believes, is you have to take a chance and hope that, in the majority, you come out on top. And he sees enough potential in fledgling manufacturing company, the Musical Instruments of Trinidad and Tobago (Mittco) to consider it worth the investment.

Hadad and his two brothers, Robert and Joseph, founders of local distribution giant Hadco Ltd, are among the country’s foremost businessmen. They’re also angel investors who believe in encouraging and supporting entrepreneurship and new ventures that have viable growth opportunities. So, when steelpan maven Akua Leith presented them with a plan to create a world-class steelpan manufacturing business in the land of the instrument’s birth, they were willing to listen. And they were convinced, joining the Mittco team as 45 per cent shareholders but providing valuable business insight and connections to facilitate execution.

“We met Akua via work he did with Phase II,” Hadad told Business Day. (Hadco are Phase II’s banner sponsors). “We had a great relationship and there was a lot of mutual respect.” Leith wasn’t initially seeking a partnership and the Hadads didn’t really know anything about pan (besides how much they enjoyed the music). But the idea took hold and what started off as advice became a full working document for a business plant to make Mittco happen, and eventually a full business collaboration.

“We tend to stay in the space we know and know well – which is food, electrical, and now manufacturing. So, pan was outside of our own ecosystem. But then as we came up with the whole work plan – we started about two years ago and it took about six to eight months – we saw the merit. Pan was born here. There’s no better tuners in the world than exists in Trinidad. Even foreign pan factories were worked on by Trini tuners. But then you ask yourself why aren’t most of the pans used in the world coming out of Trinidad?”

There’s no consistency in the product – even Phase II had to deal with delays and variations in quality whenever it ordered steel pans. Mittco, he said, sought to change that. “What Mittco wants to do is set up a system that pans get delivered on time and consistent quality. We can also export, there’s the infrastructure for that. Maybe set up an online store, or even a physical store where people can come in and feel.

“Akua and his team have excellent plans. What do we do well? We can come in and add some governance and structure to the backend, get access to financing – which we’ve done already – and found the property.”

It’s all about collaboration, he said, where each party is playing off the strength of the other to create a quality product.

“We don’t know where this is going to go but we are going to double down on it. We think if it’s done properly we can tell a story here. Pan in school? Mittco could support that. Pan price? It’s more about accessibility – creating financing models to allow people to buy a good quality product. You want to manufacture something good at a fair price that makes it profitable, self-generating and sustainable and at the same time accessible. But you not going to know (where it can go) unless you get into the project.

After nearly 30 years successfully creating a business, the Hadads have a wealth of experience and are willing to take risks – in this case, on the potential of TT’s cultural sector.

Hadad considers Hadco as an angel investor or venture capitalist: “Whatever clothes you want to dress it up in, it’s non-bank financing.”

The key is being able to sell the product to investors, and that’s where Hadad sees the disconnect with private sector investment in culture. “How convincing are you? sometimes, people involved in cultural projects might be artists who know their craft and might be exceptionally good at creating but maybe they just don’t know how to reach across the divide to business and explain how the numbers are going to add up.” At the same time, businesspeople need to be willing to listen to the artist. “I think what’s interesting about this project is we (Hadco) are not going to sit here and pretend we know about music and pan but certainly, the guys we are working with know about it and we have to listen to them.”

Hadad is humble and honest enough to admit that not everything will be a resounding success. But that doesn’t mean you don’t try.

He’s also practical about the returns on the investment. “I would also tell you that in this project the forecast is to lose money for a few years. There’s no way you can enter into this and do the correct things and build that foundation and not lose money. But we have to make sure that we have a flow of cash to keep us going. I think that is what happened to a lot of other projects in the cultural space. People just don’t have the legs to go on. They lose money two years, three years running; they find themselves not paying the bills and unable to make commitments. You lose credibility and the whole thing falls apart. I’ve seen that many times.”

With Mittco the task at hand in the short-term is to ensure that it remains well-funded with cash on hand to service commitments while building that reputation and the technical side of the business. “If we can get that done, I think in about three to four years we should be starting to get our heads above water and go long on this.”

Hadco is fundamentally a distribution company – the manufacturing part of it only came on stream about five years ago when the company laid the groundwork for its Creamery ice cream factory. Hadad admitted that perhaps the company took too long to get into the game – and it was simply because the incentives to be a distributor outweighed those of being a manufacturer.

“I will say to you quite openly that we moved late on a lot of the stuff that we should have been doing. The cynics will say (as distributors) we consume forex. Yes, that’s what we did. We built a business in distribution because there’s perverse incentives in Trinidad. As the money came in the incentives were there to go into buying and selling. And we did that. Now just about five, six, seven years ago we looked at it and said, this is untenable. This business model has nowhere to go in the future. We started to move, albeit a bit late, on these things. But we sent a signal that we are open for business. We started to play around in some manufacturing and other things to generate forex and in the last couple years we’ve managed to move the needle in our group and we are happy where we are. Again, if we started five or ten years before we’d have been in a better position. So yes, the risk aversion comes from the (consumer) behaviour (and existing economic conditions).”

He is seeing a pivot, though, with investments happening in manufacturing, and he is heartened by that. “We do have a very good facilitative trade minister and I think the will is there. Where the government needs to double down on is ease of doing business. I think that will cause a bit more capital to get invested from private sector.”

It’s a perennial complaint that doing business in TT is not easy. Government has said streamlining its approval systems and facilitating business is among its top priorities. “We talk a lot about diversification in TT,” Hadad said. “I think the expectation is we click our fingers and we are into manufacturing and export. That doesn’t happen. The private sector has to be invested. Put in the capital. It takes a while (to get returns). But if we want to diversify it can’t happen if it takes up to a year to get approvals and licences. We need to get that right.”