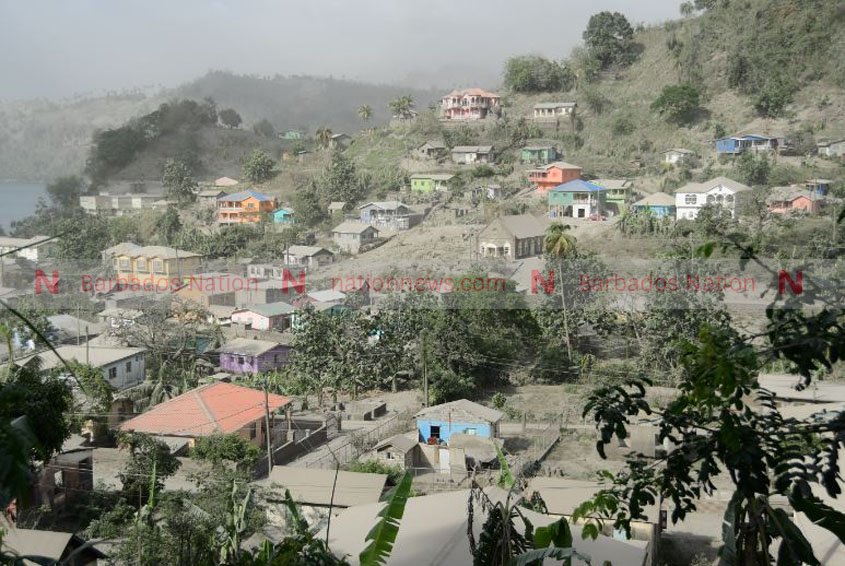 Kingstown – Seismic activity at the La Soufrière volcano in St Vincent has remained low since the tremor associated with the explosion and ash venting three days ago.

Additionally, scientists monitoring the volcano have indicated that over the last 24 hours only a few long-period, hybrid and volcano-tectonic earthquakes were recorded, with no further tremor.

The Seismic Research Centre (SRC) of the University of the West Indies (UWI) said in its latest update that since the initial depressurisation – a decrease in pressure within a volcano caused by the release of magma, gases or fluids during an explosive event – noted immediately following the April 9 explosive phase, the continuous GPS network has recorded a decrease in the overall rates of horizontal and vertical movement.

“The volcano continues to erupt. Its pattern of seismic activity over the last few days is typical of the growth and destruction of lava domes. Explosions with accompanying ashfall, of similar or larger magnitude, can occur with little or no warning,” the SRC said, adding that the volcano is at alert level Red

Meanwhile, Prime Minister Dr Ralph Gonsalves has said that residents of northern St Vincent, including communities north of the Rabacca Dry River, will be allowed to return to their homes, when the eruption of La Soufriere ends and the all-clear is given.

“As far as I am concerned, as far as the ULP (Unity Labour Party) is concerned, north of the [Rabacca] Dry River, that’s the soul of this nation — Garifuna and Calinago and all what they represent. Similarly places like Rose Bank and Petit Bordel and Fitz Hughes and Chateaubelair with Garifuna people,” Gonsalves said.

The Garifuna people are a mixed African and indigenous people who are descended from the Black Caribs, who lived here and speak Garifuna, an Arawakan language.

On April 9, after three months of effusive eruption, La Soufriere erupted explosively, 15 hours after an evacuation order was issued and just four days shy of the 42nd anniversary of its 1979 eruption.

Volcanologist, Professor Richard Robertson, the lead scientist monitoring the volcano, says that the eruption could last for up to a year.

The Red Zone in eastern St Vincent encompasses Georgetown and all the communities to its north and north of Fitz Hughes on the west of the island — where there are no built-up areas except for a few buildings in Richmond.

As of last Wednesday, the volcano had displaced at least 13 154 people — the number of people who have registered with the National Emergency Management Organisation (NEMO). Of that total, 6 208 people or 156 families were staying at 85 public shelters in the safe zone and 6 790 people representing 1 618 families were private residences.

Livelihoods, agriculture, housing, as well as public and private infrastructure in the Red Zone have been significantly affected by the ongoing eruption.

“I tell people, just like in 1902, people migrated. People themselves, if they find it’s too dangerous, they will make decisions,” Gonsalves said, adding that he knows there’ll be lots of discussion on the issues and people would have their opinion.

“And you can say what you want to say but I have mine and at the moment, the bulk of the people up there want to go back and who wants to make abstract discussions can have them but I am not in that part of the discussion.

He added that there is likely to be a population shift after the eruption, as was the case after the 1902 and 1979 eruptions.

“And we will address that migration pattern with all the consequences for health and education and so forth. But don’t ask me to say that we must not go back and rebuild North Windward, particularly over the Rabacca River, which is where the bulk of the damage would have taken place and Chateaubelair, Fitz Hughes, Richmond.

“Don’t ask me not to rebuild because they will be rebuilt and so long as God gives me strength and I am where I am, I will make every effort so to do, and I want to make that point absolutely clear,” Gonsalves said.

NEMO says that the Red Zone represents an area of “very high hazard” and is expected to experience maximum damage in the short term, and is the zone where all hazardous events have their greatest influence.

“It is defined by the zone of expected total destruction from pyroclastic flows, surges and mudflows and by the zone of maximum expected damage from all projectiles. This zone is likely to experience more than 30 cm of ash. During the course of an eruption this zone would be unsuitable for human habitation,” NEMO said in 2007 when a detailed volcanic hazard map was published.

The Orange Zone, on the other hand, represents an area of high hazard. This includes all areas of moderate pyroclastic flow and surge hazard, areas within the 5km projectile zone, and areas likely to experience between 10 and 30 cm of ash fall.

The potential for damage may be similar as zone 1, but the greater distance of villages from the volcanic centre would reduce the likely impact. These areas will be affected in a similar manner as the Red Zone during large-scale eruptions. (CMC)