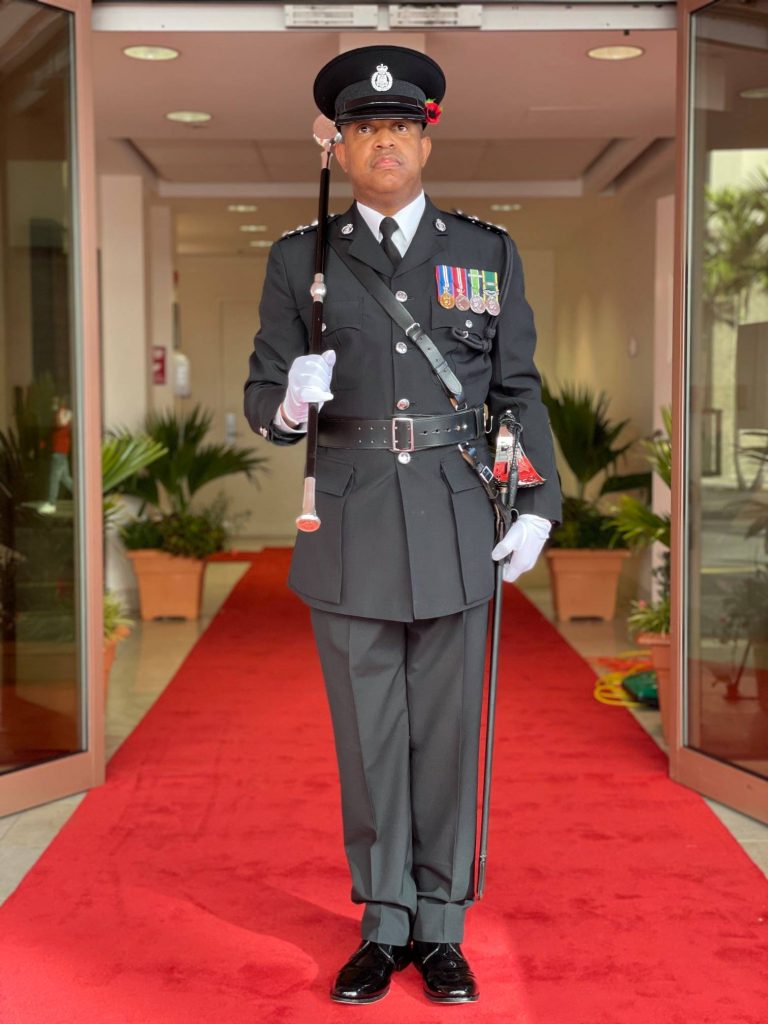 This year, Chief Inspector Dennis Astwood performed the duty of Gentleman Usher of the Black Rod, commonly known as “The Black Rod”.

The origin of the Black Rod, who was formally appointed by the Crown, goes back to early fourteenth century England. Today, with no royal duties to perform, a senior officer of the Bermuda Police Service (BPS) is selected to perform the duty of the Black Rod for the Convening of Parliament.

Traditionally, Her Excellency would order the Black Rod to attend the House of Assembly and summons the Members of Parliament to attend the Throne Speech. As part of the ritual, the Black Rod walks a slow pace from the Cabinet Grounds up the stairs to the House of Assembly, where the rod is used to bang on the door, alerting the Members that Black Rod is there. The door will be opened by the Sergeant-at-Arms, and Her Excellency’s message is delivered. The door is then slammed in the face of the Black Rod, and after a few minutes, the door reopens and the Black Rod leads the MPs from The House onto the Cabinet Grounds.

This year, due to renovations of the House of Assembly and COVID-19 restrictions, the ceremony took place inside of the temporary House of Assembly located at Veritas Place. One of the highlights of this year’s Throne Speech mentioned a new island-wide CCTV system, which will include new features and technology to assist the BPS in tackling road traffic offences and combating violent crime.

In addition to Chief Inspector Astwood’s ceremonial role, Senior Officers from the BPS stood outside of the Hamilton Police Station and saluted as Bermuda’s first female governor Her Excellency Rena Lalgie’s motorcade drove past.Not only will Chief Inspector Astwood go down in history as performing Black Rod duties for Bermuda’s first female and first black Governor, he and his wife Acting Deputy Commissioner Na’imah Astwood also made Bermuda Police Service history today, by becoming the first husband and wife to have performed this distinguished duty for the BPS. Acting DCOP Astwood performed the duty in 2010, making her Bermuda Police Service’s first and only female officer to date, to be named Lady Usher of the Black Rod.Chief Inspector Astwood is known throughout the Service for his exemplary work ethic, attention to detail and most of all, his leadership skills.

He has been a member of the Bermuda Police Service for over 34 years, working his way through the ranks from a Cadet. Chief Inspector Astwood has worked in various departments across the BPS including Narcotics/Drug Unit, the Community Action Team, Serious Crime Unit and Intelligence Unit to name a few. He has also worked very closely with foreign agencies, such as US Customs and Border Protection, DEA, FBI, ICE and RCMP.

Throughout his career, Chief Inspector Astwood has been the lead investigator in numerous high profile cases, which has resulted in successful convictions. For his hard work, he has been awarded numerous Commissioner’s Commendations, Merit Awards and letters of good work.