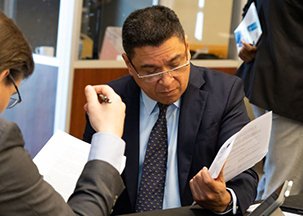 The Hon. Dr Cesar Ernesto Salazar Grande, President of the Central American Court of Justice, meticulously reviewed the draft Declaration to give his stamp of approval on the final day of the Hemispheric Meeting. You can view the Declaration here: https://loom.ly/9lZ7WuE

The Caribbean Court of Justice, The Central American Court of Justice, The Court of Justice of the
Andean Community, The Eastern Caribbean Supreme Court, and The Inter-American Court of Human
Rights, on the occasion of the First Hemispheric Meeting of Regional Courts on The Rule of Law
and International Justice held from 22 to 23 September 2022, at the Hyatt Regency in Port of Spain
Trinidad and Tobago:
Re-affirming their commitment to the principles and objectives contained in their founding documents,
the Charter of the United Nations, and the American Convention on Human Rights, and other relevant
international human rights instruments, as accepted by the States ascribing to their jurisdiction;
Noting with commendation the existing cordial relationships that allow for institutional and
jurisprudential dialogue, the sharing of information and best practices for their common benefit, and
the desire to strengthen that relationship through continued shared dialogue and efforts between and
among the regional courts of the Americas;
Strongly condemning all wars and the concomitant senseless loss of human life and breaches of the
international rule of law and urging the swiftest end possible to all conflicts which threaten global
peace, security and justice;
Welcoming subscription to this Declaration on the Rule of Law and International Justice to
publicly affirm their fidelity to the following principles that operationalise and advance institutional
integrity and stability of the regional courts in Latin America and the Caribbean and which further the
cause of regional jurisprudence: