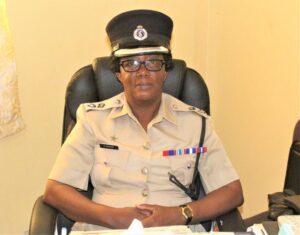 Superintendent Charmaine Stuart, the first woman in the history of the Guyana Police Force (GPF) to lead its music band, died on Wednesday at age 55.
According to GPF, it’s Director of Music and Culture passed away in the early evening hours while receiving treatment at the Georgetown Public Hospital Corporation (GPHC). Her son, Kevin Jones, said that Stuart was rushed there after suddenly complaining of a chest pain.
Acting Commissioner of Police Nigel Hoppie, related during a visit to her home yesterday, that Stuart’s sudden demise has left a void in the Force that cannot be filled right away.
Hoppie accompanied by GPF’s Welfare Officer, Deputy Superintendent Jewel Sullivan; the second-in-charge of Administration, Allison Moore; and Quartermaster, Assistant Superintendent Donna Ferguson, had visited Stuart’s home to express their condolences.
They assured her relatives that the GPF will extend its full support to them during their time of grief.
Stuart had served GPF for more than 30 years and during that time she had made some major accomplishments. One of them was becoming the first woman in more than 177 years to lead the Force’s music band. She made that achievement on August 1, 2016, when she succeeded her predecessor, Assistant Commissioner Cecil Bovell, who had retired.
Superintendent Stuart also became the first female rank in the recent history of the Force to be awarded overall best cop of the year. She was presented with that award in 2017 while holding several positions in the Force.
Apart from being the Director of Music and Culture, she also served as the Chairman of the Joint Services Committee and Vice-President of the Guyana Association of Women Police.
During the 2017 awards ceremony, Stuart was described by her colleagues and superiors as an officer known for going above and beyond the call of duty. They related too that she was a shining example of literacy and good etiquette. It was highlighted as well by the then Acting Commissioner of Police David Ramnarine, that Stuart was one of those ranks who could have been reached at all times on her cell phone, even on weekends.