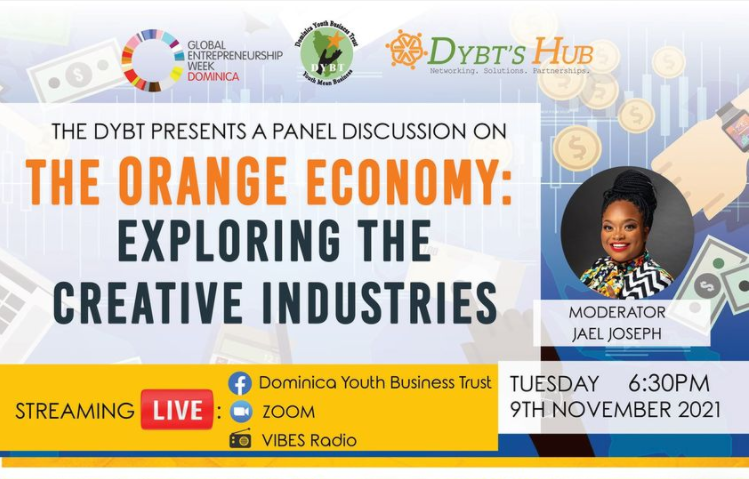 In a Zoom virtual meeting on November 9 2021, the Dominica Youth Business Trust (DYBT) hosted six panelists for their discussion of The Orange Economy- Exploring the Creative Industries- under the Global Entrepreneurship Week calendar of events.

Each panelist spoke on the passion for their art and the challenges they faced, particularly during the COVID-19 pandemic.

Yuri Jones, a photographer and videographer, spoke on how diversifying his portfolio helped him to be better at what he does. He emphasized on the importance of continuous learning of your chosen artform to keep abreast and informed. He said that the global pandemic, COVID-19, allowed him to pick up some skills in design and image editing, and that he learned in the process how to create an impactful video. He iterated that the pandemic gave him the time to brush up on his skills and has led to his overall development.

Sheldon Alfred, a current Master’s student of the Harvard University, Graduate School of Design, told of his struggles with accepting the lockdowns from the pandemic, and how his music helped him and others feel better about their situations. He stated that as a boy at the St. Mary’s Primary, the teachers saw something in him they did not see in the other students, and encouraged him to participate in the 2006 Junior Calypso. His love for music grew from there and dabbles in business by always getting a way to monetize his ideas.

Aaron Hamilton, an artist at heart, spoke of his passion for painting. He said that being accustomed to the traditional way of painting worked really well for him until the pandemic. Working digitally was a first for him, and he used the time from lockdowns to harness his digital painting abilities. He spoke of no longer selling one copy of his art, but printing them on t-shirts, cups, etc., to make the most out of his artform. Apart from that, he offered training to students in Concord to give back to society.

Vanessa Winston, the only female panelist, had much to say on the topic of her crafts. She spoke on the effectiveness of involvement and strategy that helped her as a single mother. She emphasized that word of mouth was good marketing and it is important to be professional and calm to your customers at all times. When asked about how she makes money as a craftswoman, she said that although it is hard to compete with foreign mass production, when you create networking, it helps the artists a lot. She spoke of her own involvement in offering training in summer school projects, as well as consultations, guest speaking and showcasing. All of these, and more, has helped her be a handcrafting designer full time. She also spoke on how her art represents her people and how her association has a sewing project for the objective of crafting reusable sanitary napkins. As a final note, she admonished creatives to use their work for serious advocacy, whether it is for women, children, domestic violence, etc.

Kreig Harris announced himself as being ‘free-spirited’. His love for photography showed as he expressed how he embraced nature to build his art during a rough period of all of our lives. He spoke of his recurring marketing strategies, and how this has helped him balance his books. He exclaimed that it was the strategy of diversity that was a result of the lockdown.

Julian James, the final key orator for the evening, told us of his jewelry as the proprietor of his business, Natural Mystic Creationz. Speaking out of a passionable heart, he said that he does his craft because he loves it, and not just as a skill to make money. However, he encouraged his audience to pick up a skill to sustain them. When the host asked him about people’s criticism of his art, he replied that it was a rare thing to happen, however the industry “does take a lot from you”. He said that craftsmen need to work really hard to sell their craft individually as opposed to a musician who can sell his music for $15 000.

As the virtual discussion came to an end, the members of the panel left the audience with some important encouragement for creatives: remind yourself of your and your products’ value, never stop learning your artform, and it is not about perfection but progress.