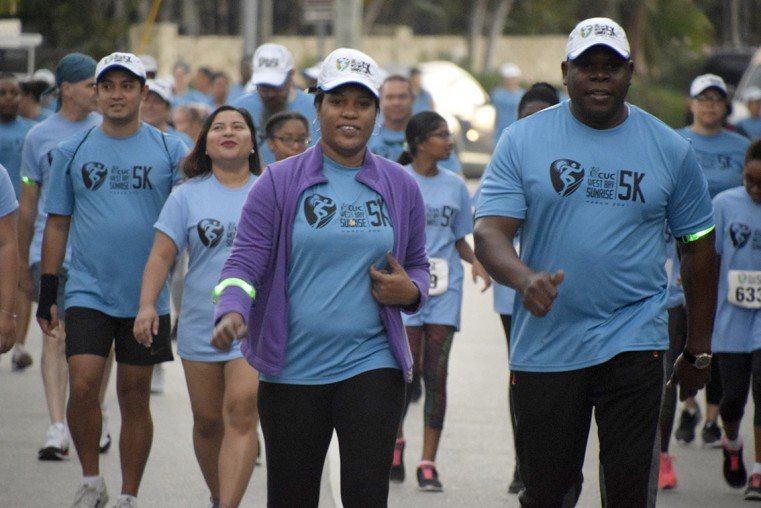 It was at sunrise, and it was for Sunrise. The CUC 5k took to the streets between West Bay’s Ristorante Pappagallo, on Conch Point Toad, down to Thistle Lane and back, to raise money for two great causes: The Sunrise Adult Training Centre and the Cayman Islands Athletic Association. More than 300 walkers and runners got up early and were all set and ready to begin, each paying 15 dollars for Adults and 10 dollars for under-17’s just after the sun shot its golden rays over the horizon.

Richard Hew CEO of CUC explained why they want to keep on supporting the annual event: “I know that there have been a lot of top runners from this district, so we thought we would try and resurrect running in the district and have a wholesome community event that everyone can participate in. The Sunrise Adult Training Centre has been a long-time community partner with us, so we do a variety of annual events with them, like Thanksgiving lunch. It’s part of giving back to the community that we serve. We’ve also had a long-time partnership with the Athletics Association, and again that promotes a healthy lifestyle, and many CUC employees are former national athletes, so it’s something that employees feel strongly about, where we can give back and help develop our community.”

“We’re cheering on our son, Leo Shilling he should be in the top five,” said proud dad Aaron Knapik, “He’s 15 years old, he’s fallen in love with running, he absolutely loves it, and he does most of the races now in Cayman. It’s his passion and we just want to support him.”

Dominic Dyer, 21 was first male over the line. “I did a pretty good time this morning -better than expected which is always nice,” he said. The first female runner over the line was Olivia Shanks: “I was really pleased with it, I did a time of 18.38. I just want to thank all the organizers because It’s been a great event, with a really well-planned out route and a great finish with coconuts to drink from and everything. I haven’t really been training hard, just running steadily to keep fit,” she said.

Kenrick Webster was the first walker over the line, as he was last year at the same event. He has a really amazing ‘power-walking’ method that makes him faster than even some of the runners. Ava Hider was the second woman runner over the line: My time was 23 minutes. Olivier was very fast today. I was trying to catch her, but she was in top form. I’ve done this event every year for four years, I always really enjoy it because its for a good cause,” she said. Esmond Brown 33, was the second male runner over the line: I thought I did OK, but then you see who else is in the race and you’re like, ‘hmmm… I’ve got some work to do, and I’ve got to lose about 10 years’”.