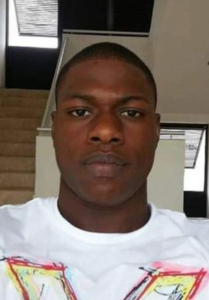 An elderly woman was last night disturbed from her rest by the sound of gunshots. A short while later she found out that it was her grandson who was executed by gunmen on Drysdale Street, Charlestown, Georgetown.

The slain man has been identified as Odingo Anthony Yearwood, 25, also known as “Dingo” of Charlestown. Yearwood was gun downed sometime after 20:00hrs.
When Kaieteur News arrived at the scene, his body, covered with a brown cloth, was still lying on the street in a pool of blood, a short distance from his home. Three spent shells were seen near the body and a trail of even more spent shells could be seen leading to the victim’s bicycle which was found in an alleyway close to his home.

His grandmother related that he had gone home earlier that evening but received a phone call shortly after and went out.
The woman said that he did not tell her where he was heading. He reportedly locked his door and the grandmother went to bed.
A while later his grandmother said she hear “pie, pie, pie, pie (sound of gunshots).” When she came outside to investigate, the woman said that Yearwood “was lying on the road bleeding from gunshot injuries.”
Another family member who had seen Yearwood alive, said that she saw him riding home on his bicycle just minutes before he was gunned down.
An eyewitness related that Yearwood was attacked in an alleyway leading to his yard. That person recalled him having a heated conversation with an individual.
Kaieteur News understands that Yearwood’s last words before gunshots rang out were, “Ow budday a know yuh, don’t shoot meh.”
Yearwood in a bid to escape his killer, reportedly started to run but the gunman gave chase, firing more shots at him in the process.
Some of those bullets struck Yearwood causing him to eventually collapse on Drysdale Street.
Another individual, also claiming to be an eyewitness, has alleged that there was a second gunman who intercepted Yearwood as he ran. That gunman also fired some shots at Yearwood, the eyewitness said.
Police are investigating the matter.