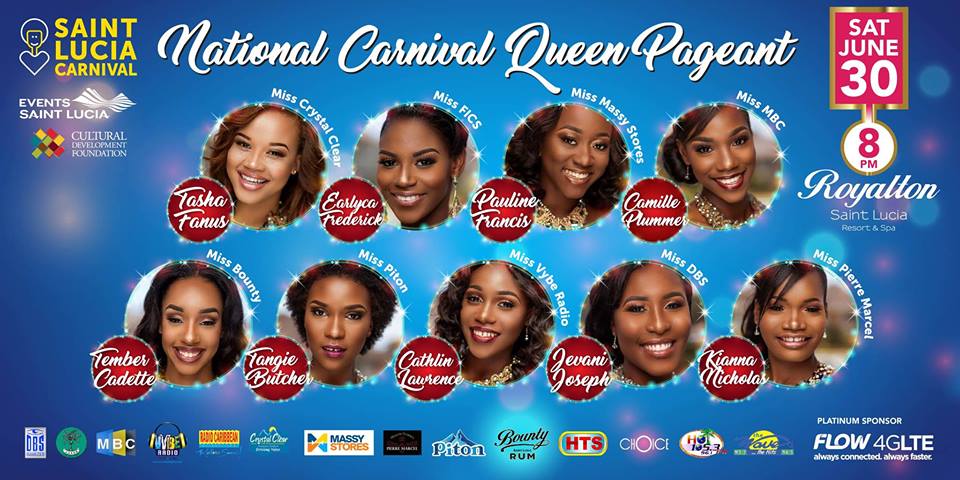 (PRESS RELEASE)– After a most spectacular and dazzling sashing ceremony on April 18th, 2018 at the Landings Resort and Spa, it is no surprise that this year’s National Carnival Queen Pageant has gone Royal!

And by that we mean the Royalton Saint Lucia Resort & Spa, arguably one of the most exquisitely modern resorts in Saint Lucia. Come Saturday June 30th, just about three weeks from now, nine amazingly brilliant and beautiful Saint Lucian belles will vie for the title of National Carnival Queen 2018.

“The Royalton Saint Lucia Resort & Spa could not be a more ideal venue for this prestigious affair,” remarks Lavelle duBoulay, ECSL Events Officer for Saint Lucia Carnival. She adds, “This venue lends itself to creating elegance and glamour fit for a queen which these nine are in their own right.

We can expect an atmosphere and event of regal magnificence, from the décor to the crowning of one of these beautiful ladies as the new Carnival Queen 2018, a title that can be captured by any of the nine including, Tasha Fanus Miss Crystal Clear, Earlyca Frederick, Miss FICS, Miss Massy Stores, Pauline Francis, Miss MBC, Camille Plummer, Tember Cadette, Miss Bounty Rum, Tangie Butcher, Miss Piton Beer, Cathlina Lawrence, Miss Vybe Radio, Jevani Joseph, Miss DBS and finally, Miss Pierre Marcel, Kianna Nicholas.

Weighing in, Leila Williams, Sponsorship and Marketing Officer for ECSL comments, “In 2017, this coverted title of Carnival Queen was captured by Ms. Chancy Fontenelle, Miss Helen HTS/100 FM, who has carried the title gracefully for the past twelve months. We at ECSL thank her and wish her every success as she passes on this grand privilege to one of our nine and moves forward and onward to even greater successes,” she concludes.

Thomas Leonce, CEO of Events Saint Lucia reaffirms one of the core objectives that drives the team at ECSL. “With local, regional and international eyes on us, we have spared no effort in ensuring that the production value and quality of all of Saint Lucia’s national events, especially during this carnival season, continue to live up to what is internationally accepted. We must ensure that Saint Lucia Carnival remains one of the most sought-after carnival products in the world as we continue to raise the bar, or should we say, the crown in this case,” remarks the CEO.

Tickets for the National Carnival Queen Pageant are available at an Early Bird Special of EC$80 from now until June 15th, 2018 and can be purchased at The Cell Outlets island-wide. The regular ticket price thereafter is EC$100. The public is advised that there will be no tickets sold at the venue on June 30, 2018 at the Royalton Saint Lucia Resort at Spa. The National Carnival Queen Pageant is set to begin at 7 pm.

Saint Lucia Carnival is produced in Collaboration with the Cultural Development Foundation (CDF).

Full details about Soleil – the Summer of Festivals can be found at www.stlucia.org/summerfestival.

Full details about Soleil – the Summer of Festivals can be found at www.soleilsaintlucia.com