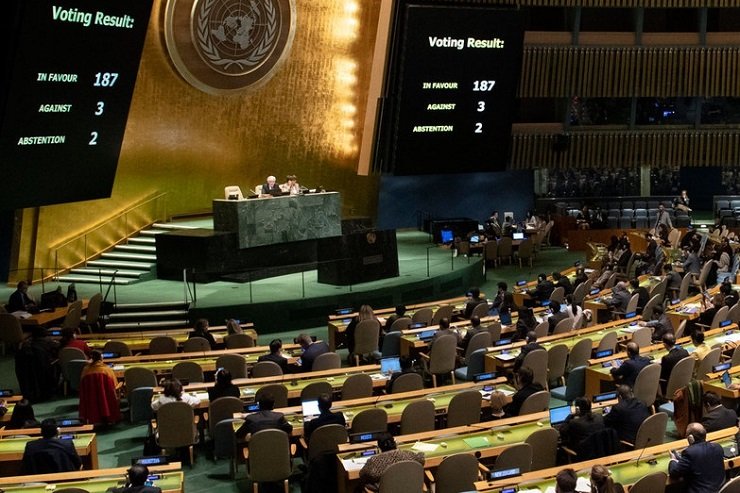 NEW YORK, United States, Friday November 8, 2019 – Caribbean Community (CARICOM) member states say the economic, commercial and financial embargo imposed by the United States against Cuba is impeding regional development as a whole, as the United Nations (UN) General Assembly adopted a resolution for the 28th consecutive year, calling for an end to the sanctions.

During a vote on Wednesday, 187 UN Member States underlined their support for the resolution while Brazil and Israel joined the US in voting no.

During presentations ahead of the vote, the 15 members of CARICOM highlighted Havana’s support to the region. Cuba has deployed medical professionals to distressed areas, including those affected by natural disasters, among other initiatives.

Grenada’s Ambassador to the UN, Keisha McGuire, recalled that the country was among the first to assist The Bahamas in the aftermath of Hurricane Dorian in September.

She characterized the embargo as “an anachronism and aberration” in an era when global cooperation is critical to address common challenges such as climate change.

“It is in this broader context that we view the embargo—not just as a punitive act against Cuba but as an impediment to Caribbean regional development as a whole,” she told the General Assembly.

The embargo is rooted in the Cold War, when Fidel Castro and his revolutionaries seized power. Tensions only eased more than a half-century later when the Barack Obama administration established diplomatic relations with Cuba, modifying several aspects of the embargo such as lifting some travel restrictions.

However, as the UN resolution states, these policies “contrast” with measures implemented by the current President, Donald Trump, in 2017.

Cuba’s Foreign Minister, Bruno Rodríguez Parrilla, reported that in recent months Washington has begun to “escalate aggression”, including by preventing international fuel shipments to the island, scaling down consular services, and attacking national programmes that support other developing countries.

“The blockade has caused incalculable humanitarian damages. It is a flagrant, massive and systematic violation of human rights,” he charged. “It qualifies as an act of genocide under Articles II (b) and (c) of the Convention on the Prevention and Punishment of the Crime of Genocide, adopted in 1948. There is not one single Cuban family that has not suffered the consequences of this.”

Palestine, speaking on behalf of the developing countries’ bloc, the Group of 77 and China, regretted that the US has strengthened the embargo.

“From April 2018 to March this year, the impact of the US embargo on Cuba’s foreign trade amounts to more than US$4 billion,” Ambassador Riyad Mansour said.

“Limited foreign investment and difficult access to development credits translate directly into economic hardship and humanitarian impacts for the people Cuba. The country’s socio-economic reforms have also been hampered by the embargo.”

US Ambassador to the UN Kelly Craft, speaking prior to the vote, insisted that the US, like all nations, “get to choose which countries we trade with”.

“This is our sovereign right,” she said. “So, it is worrying that the international community, in the name of protecting sovereignty, continues to challenge this right.”