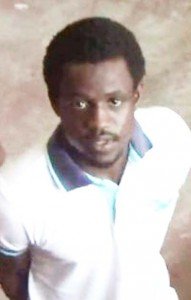 Oneal Griffith, a boat operator from Linden, Region 10, was yesterday sentenced to 75 years in prison for the murder of Brazilian miner, Braz Alves Dos Santos. The sentence was handed down by Justice, Navindra Singh, at the High Court in Essequibo, after Griffith was found unanimously guilty of the offence by a mixed 12-member jury.

According to the charge, Griffith murdered Dos Santos during a robbery, which took place on December 30, 2015, at his Puruni, Mazaruni mining camp.
Following the verdict, Griffith told the court that he is innocent of the crime. “I’m an innocent man. The State put a case against me that I know nothing about,” he said.
In her address to the Court prior to sentencing, State prosecutor, Tiffani Lyken, asked the court to take into consideration in the judgment, the fact that a weapon was used during the commission of the offence and that Griffith showed no remorse for his actions.
On the other hand, defence attorney, Ravindra Mohabir, in his plea of mitigation pointed out that this is the first time his client had any brush with the law.
The lawyer noted that Griffith comes from a stable home circle, is a married man and has two children.
Following the consideration, Justice Singh sentenced Griffith to serve 75 years in prison.
The Judge noted that Griffith will only have the possibility of parole after serving 50 years. Justice Singh also ordered that the prison authorities deduct the time Griffith spent in pre-trial custody from the sentence.
According to reports, on December 30, 2015, Dos Santos was working at a mining camp when Griffith held him and another Brazilian at gunpoint. It was reported that a scuffle ensued during which Dos Santos was shot to the neck.
After reportedly killing the miner, Griffith allegedly escaped with a quantity of raw gold, a boat and an engine. However, he was captured at Itaballi. The stolen vessel and some of the gold were recovered.

It was reported that he had disposed of the firearm, but was positively identified by one of the victims. Earlier that day, Griffith had reportedly robbed several Brazilians at a mining camp but took out a gun and shot Dos Santos.