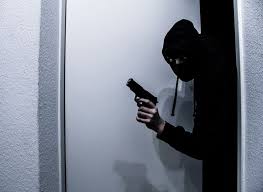 The detectives of the Special Unite Robberies (S.U.R.) have been kept busy investigating a spree of robberies that have been reported over the past couple of weeks . During each robbery reported, the unknown perpetrator(s)entered the establishment dressed in dark-colored clothing, brandishing a weapon and demanding their daily earnings. There were two of said robberies that took place on the evening of Friday, December 4, 2021. At approximately 7:15 pm Central Dispatch received an initial call about a robbery at a supermarket in Dutch Quarter.

Several police patrols were dispatched to the scene of the incident. Subsequently, it was revealed that three reasonable young men dressed up in dark clothing entered the supermarket and at gunpoint robbed it of its earnings.

Having committed the robbery, the three suspects ran off in an unknown direction. Patrol conducted a search in the area but the suspects were not found.

Roughly 20 minutes later, Central Dispatch received another call of an ongoing robbery at a supermarket in St. Peters area. Judging by the descriptions obtained, it appeared to be the same three suspects who previously robbed the supermarket in Dutch Quarter.

Seeing the uptick, the police of St. Maarten finds it imperative to educate the public as well as the business owners in an effort to minimize the risk of being targeted by these criminals.

The best way to “deal with” with armed robberies is to prevent them. Understand that robbers commit crimes because they believe that the payoff outweighs any risk.

Robberies usually take place when there’s a lack of planning for emergency situations and when poor cash handling is involved. Without the right security measures, many businesses unknowingly make criminal situations convenient for robbers. The police will continue to do our part and we will continue to ask the community to assist. Only by working as a unit can we stop the individuals who go into the community looking for an easy payout by committing a robbery. Prevention is always better than finding a cure.

To help you do that, the Sint Maarten Force Communication department has put together some tips that can help your business from becoming a victim of robbery and also how to deal with them in the event a robbery does occur.

Robbers are after cash, so take the necessary cash handling precautions to minimize risk and loss. Here are some of the ways to do that:

 Avoid having unnecessary amounts of money in your register. Only keep the amount you need to conduct normal business, and either put everything else in a safe or transfer to the bank.

 Don’t make predictable trips to the bank. Change up the times of your trips as well as your route.

 Have marked money in your register. Take five and ten-dollar bills then record their serial numbers and series dates. Place those bills in your till and include them in the money to be given to the robber. Do not use marked money in regular transactions. Improve visibility Having a checkout area that’s highly visible can discourage robbers. That why it’s best to:

 Avoid fixtures or signs that can obstruct views of and from the register. These include large signs on your windows and doors, counter displays that are too high, and fixtures that block people’s view from the outside. Cover your blind spots using mirrors or cameras. This will help you monitor the hard-to-see areas in your store. Invest in good lighting both inside and outside your stores.

 Avoid surprises. Activate any silent or holdup alarms you have in the store. Try to give them the money in your register.

 Be observant. Take note of the number of robbers involved as well as their physical characteristics (e.g. height, eye and hair color, hair length, etc.). Also take note of what they’re wearing and any weapons used.

 Call the police immediately after the incident. Provide time of the robber’s departure and give them a physical description as well as the method of travel.

 Preserve the evidence. Keep clear of the crime scene and avoid touching anything that the robber(s) may have touched.