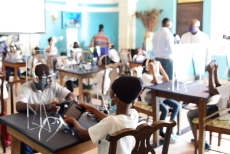 Taylor made clear that students in public schools on many islands are in the classroom.

“It is not as if schools have not had some experience with going face-to-face,” he told Eyewitness News.

“We do have a good sense of how it is going to unfold.

“The main thing that is going to be a difference for people will be the fact that most of the schools, if not all of them — but I would think most of them — because of the restrictions put on us by the Ministry of Health, is that no more than 50 percent of the enrollment can return to school on any one day.

According to the director, priority at a particular school may be given to certain grades or those with upcoming exams.

He said another factor will be the number of classrooms available at each campus as repairs continue at a number of schools.

Additionally, some teachers and staff may be limited when it comes to remote learning, which could impact the number of students returning for traditional learning on some campuses.

“To the extent that we have to oblige that, then it might impinge on what we can deliver face-to-face.”

He maintained that one style of learning does not and will not fit every school, echoing Minister of Education Jeffrey Lloyd.

He said: “We have delineated a program in the broad sense, but schools then go ahead and implement it based on what their capacity is or what their circumstances are at the time. In a nutshell, we are saying that the schools will communicate with clientele, students and parents to indicate when students are supposed to come in, what grade levels and on which days, and which subjects they will be taking.

“All those things will be dealt with at the level of the school.”

Taylor explained that this Friday and next Monday are midterm days, but some schools may call students in before next Tuesday, February 23, to conduct orientation or to bring in groups to progress with coursework for Bahamas General Certificate of Secondary Education (BGCSE) exams.

Taylor said when schools are ready, the department is “allowing them to go”.

He said many parents and students are longing to return to the classroom, and “the faster, the better” once all of the health protocols are being followed.

The ministry has been in discussions with the teacher’s union on the return to traditional learning on four islands.

Taylor described those ongoing discussions as progressing, but said there were still matters proposed that are being discussed.

The extensive list of recommendations from the Bahamas Union of Teachers (BUT) included plexiglass for teachers’ desks and coronavirus testing among the student population.

Neither of those measures will be implemented, according to the director.

He said the Ministry of Education does not expect teachers to teach “camped behind a desk”, and it is not minded to test students.

He said the government has expended hundreds of thousands of dollars, however, on signage, sanitization and other mitigation measures against the virus, as well as improved protocols in the event of a suspected case or cases on a school campus.

Additionally, supplies to shore up resources are being sent to schools this week, according to Taylor.

He pointed out that students attended schools across the country for national exams in recent months.

Asked about the number of confirmed cases stemming from those exercises, Taylor was unable to provide an exact figure but said he believes there may have been a small, isolated number of cases.